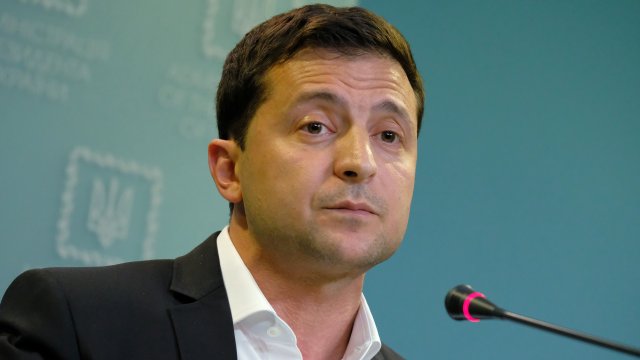 According to two sources who spoke with The Associated Press, Ukrainian President Volodymyr Zelenskyy was feeling pressure from President Donald Trump's administration in May, and U.S. State Department officials were told about it.

The sources said Zelenskyy was concerned about President Trump wanting him to investigate Joe Biden and worried that doing so could impact the 2020 U.S. presidential race. This was before the two leaders' July 25 phone call, the catalyst for the impeachment inquiry against President Trump.

The sources told the AP that Amos Hochstein, an American who sits on the board of a Ukrainian gas company, met with Zelenskyy on May 7. Hochstein later told two U.S. Embassy officials that Zelenskyy was asking for advice on how to address President Trump's request for an investigation. Hochstein also reportedly went to Washington and told then-Ambassador Marie Yovanovitch about the meeting.

Back in September, Zelenskyy denied feeling pressured to investigate Biden. Soon after President Trump released the transcript of their July 25 call, the leaders had a joint news conference where Zelenskyy said the call was "normal" and that "no one pushed me."

Republicans have pointed to Zelenskyy's statement as evidence that the president never pressured Ukraine to open an investigation. But if U.S. officials were, in fact, told that Zelenskyy felt pressured by President Trump, it could poke holes in that argument.