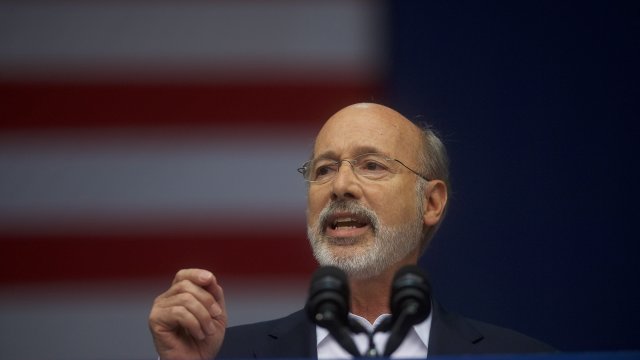 According to The Associated Press, the agency is looking into how the administration issued permits to the multimillion-dollar pipeline project, which would carry liquid natural gas across the state. The pipeline construction has faced temporary shutdown orders, lawsuits, protests and millions of dollars in fines. A spokesperson for Energy Transfer LP, the company behind the pipeline, told the AP the FBI hasn't contacted it about the project.

Sources told the AP the FBI wants to know if Wolf or his administration forced environmental protection staff to approve the permits and whether they received anything in return for giving approval.

Pennsylvania's Department of Environmental Protection approved the permits in 2017, but environmental advocacy groups quickly accused the administration of advancing permits that were incomplete and illegal. The Mariner East 2 pipeline began operating December 2018 and the Mariner East 2X is supposed to be finished in 2020, but the department stopped the permits in February of this year. Wolf said Energy Transfer did not respect the state's laws or communities.

On the other hand, Wolf and his administration have previously defended the project, saying the permits included strong environmental protections and that the Department of Environmental Protection was not forced to approve the project. Wolf has also said the economic benefits of the pipeline would outweigh the potential environmental harm.

The nearly $3 billion project is one of the largest in Pennsylvania history. As of midday Wednesday, Wolf’s administration had not commented on the investigation.

According to AP, the pipeline's construction has opened sinkholes in lawns and contaminated streams and private water wells. An explosion along the line last year destroyed a home. Many of the project's critics worry about the possibility of a deadly explosion.