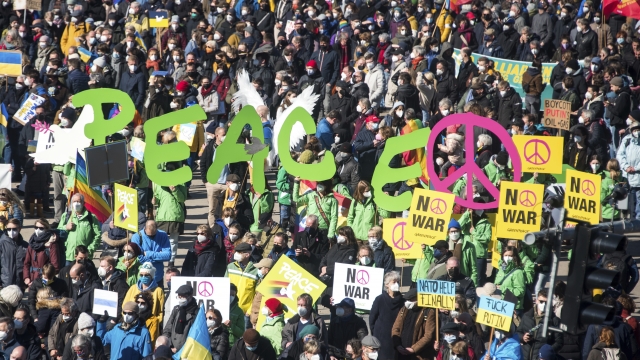 Tens of thousands of people rallied Sunday in cities across Europe to protest against Russia's ongoing war in Ukraine, with small vigils taking place in Russia as well despite a crackdown by authorities against such demonstrations.

German trade unions called a protest in Berlin, where sunny weather boosted the turnout. The march led from the city's Alexanderplatz — a large square named after Russian Tsar Alexander I — to a site near the Brandenburg Gate.

Many participants carried flags in the blue and yellow colors of Ukraine, while others bore banners reading "Stop the War" and "Peace and Solidarity for the people in Ukraine."

Norbert Herring, who held up a sign that read "What are you doing to your neighbor?" as the crowds filed past the Russian Embassy, said the images from Ukraine reminded him of the bombing of cities during World War II.

Several participants at the Berlin protest said they were Russians ashamed about what their country was doing.

"We're against this war so we wanted to show our solidarity," said Aleksandra Belozerova, a Russian studying in Germany. "It's the least we can do in this situation."

Her friend, Aliia Biktagirova, held a sign with letters for the Russian phrase for "No War" represented as asterisks to reflect the censorship she said is taking place in Russia concerning the conflict.

In Russia, where demonstrations against the war in Ukraine have been typically met with a heavy police response, rights group OVD-Info said more than 668 people had been detained in 36 cities as of late afternoon Moscow time.

There was a heavy police presence at central locations including Manezhnaya Square near the Kremlin, with officers carrying demonstrators away to waiting police vans, in footage posted by Russian media. The number of people protesting nationwide appeared to be far fewer than the last major protests a week ago, when OVD-Info listed more than 5,000 people who were detained.

Anti-war protests were also staged in Warsaw, London and the German cities of Frankfurt, Hamburg and Stuttgart.

A small far-right party organized a protest in Serbia's capital, Belgrade, in support of Russia's invasion of Ukraine.

The occupants of dozens of cars waved Russian and Serbian flags, honked horns and chanted slogans in favor of Russian President Vladimir Putin. Some cars had "Z" painted on them — the letter is used on Russian armored vehicles in Ukraine and is now a symbol of support for Russian troops.

Despite formally seeking European Union membership, Serbia has refused to join international sanctions against its ally Russia despite voting in favor of the U.N. resolution condemning Moscow's aggression. The country's dominant state-controlled media carry frequent pro-Russia reports about the war.

One day after rallies in Florence and Naples, Italians and Ukrainians who live in Italy turned out for protests in Milan and Rome on Sunday against the war in Ukraine.

In the first row of a march in Milan, Italy's financial capital, protesters held bloodied cloth bundles to represent children killed in Russian attacks on Ukrainians. Some children held drawings, and many marchers streaked their cheeks in the colors of the Ukrainian flag.

Before the march, protesters stretched out an enormous, rainbow-colored peace flag in a Milan square.

In Rome's march, one of the participants held a cardboard sign that read, "Close the Sky,'' an apparent reference to Ukraine's plea to NATO to establish a no-fly zone over Ukraine against Russian warplanes. Italy's government, like that of fellow NATO allies, have ruled out a no-fly zone option, contending such a move would risk vastly widening the conflict in Europe.

Pope Francis decried the "barbarianism" of the killing of children and other defenseless civilians in Ukraine. He told a crowd estimated by the Vatican to number 25,000 people gathered in St. Peter's Square for his customary Sunday noon appearance that the attacks must stop "before cities are reduced to cemeteries."

In Cyprus, dozens of Russian nationals joined Ukrainians in the coastal resort town of Limassol Sunday to protest the war in Ukraine. About 50 Russians converged on Limassol's promenade prior to joining with other protesters to chant slogans such as "Stop the war, stop Putin" and waving blue and white flags they said where the Russian national flag without the red stripe that represented "blood and violence."

Protester Evgeniya Shlykova, who has been living and working in Cyprus for five years, told The Associated Press that despite Russian propaganda, Ukraine "didn't deserve this action from our government" and that protesters demand an immediate end to the war "that we don't support."

"I do believe that the person who did the most to make Russia weak and not united is Putin himself," said Shlykova who faulted the Russian president and his supporters for bringing the world's wrath on Russia that is proud of its humanistic values and culture. "But now Russia is the aggressor for the whole world, and we protest it."

Earlier Sunday, Ukrainian nationals in Taiwan and supporters also staged a march in Taipei to protest the Russian invasion of Ukraine.