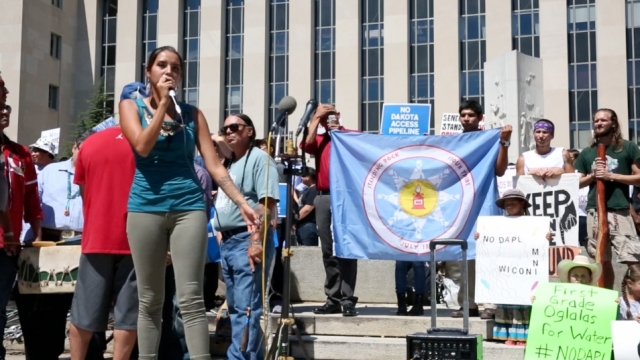 SMS
Anti-Pipeline Activists Take Their Fight To Washington, DC
By Kate Grumke
By Kate Grumke
August 24, 2016
The Standing Rock Sioux Tribe from North and South Dakota is leading the fight against the pipeline, which is being built near their reservation.
SHOW TRANSCRIPT

The Standing Rock Sioux Tribe is trying to block a pipeline in North Dakota.

The $3.8 billion pipeline is supposed to run from oil fields in North Dakota to Illinois. It doesn't quite cross through the Standing Rock reservation, but it will cross the Missouri River less than a mile away.

The tribe had a hearing in a District Court to try to get an injunction.

Other tribes and activists from all over the country were there.

Actresses Susan Sarandon and Shailene Woodley were there, too.

In North Dakota, people are camping out near the pipeline construction site. Some have been there since April.

There are reportedly more than 40 tribes there from all across the country.

"The last time the seven bands of the Lakota-Dakota-Nakota nation stood together was at the Battle of the Greasy Grass, June 25, 1876. So this is historic that they answered that call," said Jon Eagle Sr., Tribal Historic Preservation Officer for the Standing Rock Sioux Tribe.

The Standing Rock Sioux Tribe will find out if it got the injunction by Sept. 9.