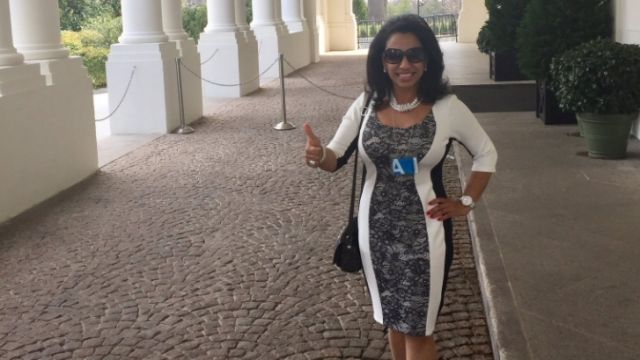 A well-known anti-Muslim activist reportedly spent the day at the White House.

Brigitte Gabriel tweeted two photos of herself — including one in a meeting — at the White House on Tuesday. Gabriel founded ACT for America in 2007.

The group calls itself a "grassroots national security organization." But the Southern Poverty Law Center calls it the nation's "largest grassroots anti-Muslim group."

According to its website, ACT has 500,000 members with 1,000 chapters across the U.S. But the Southern Poverty Law Center says the group has fewer than 50 chapters that are active.

But Gabriel has since said she and members of ACT are only talking about "radical Islam."

She tweeted Monday night that she was preparing for a Tuesday meeting at the White House. Shortly after, advocacy groups like the Council on American-Islamic Relations called on the White House to cancel Gabriel's visit.

CAIR called ACT for America "one of the main sources of growing anti-Muslim bigotry in our nation."

White House officials told Buzzfeed and Talking Points Memo they didn't know about any meetings with Gabriel. The outlets followed up with the White House after Gabriel tweeted the photos Tuesday. But as of Tuesday evening, they hadn't received any confirmation of the visit.