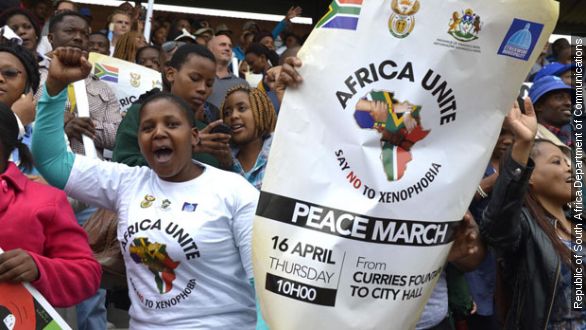 Xenophobia is sweeping across South Africa. (Video via Tracy Lee Stark / The Citizen)

Waves of anti-immigration attacks have struck South Africa in recent weeks, forcing thousands of immigrants in parts of the country to close their shops or flee and seek refuge for fear of being targeted. At least five people have reportedly died so far.

The mobs, which have been compared to Russia's 19th century pogroms, blame immigrants for South Africa's staggering 24 percent unemployment rate and accuse them of being a drain on the country's economy. (Video via eNCA News)

Immigrants primarily come from other countries in Africa such as Zimbabwe, Zambia, Mozambique or the Congo, as well as parts of South Asia. (Video via Voice of America)

Not all foreign nationals have fled the violence — some have organized counter gangs, using machetes and improvised weapons to defend themselves. (Video via YouTube / shuaib k)

"The attacks violate all the values that South Africa embodies, especially the respect for human life, human rights, human dignity," he said.

"It is very tense here. The police are all over the city monitoring what is happening," said The Witness reporter Jonathan Erasmus.

Riot police in cities such as Durban and Johannesburg have forcibly broken up protests from both sides, using rubber bullets and water cannons.

The cause of this recent xenophobic unrest is being linked to a March speech by Zulu King Goodwill Zwelithini, who said foreign nationals should "pack their belongings and go back to their countries."

The king, however, claims his words have been distorted and misquoted. South African news station News24 reports he now has hate speech and human rights charges being brought up against him.

South Africa has suffered xenophobic attacks in the past, including attacks in 2013 and 2008. At least 62 people died in the 2008 attacks.

This video includes images from the Republic of South Africa Department of Communications.