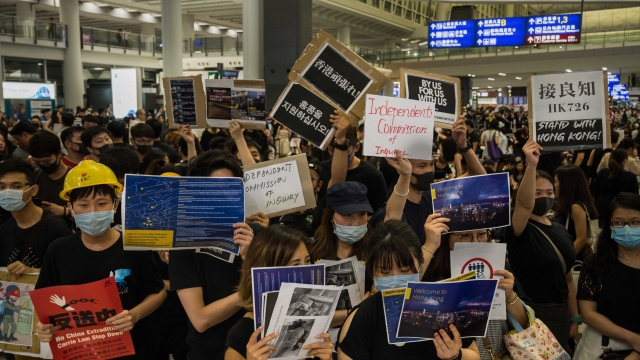 On Friday, thousands of demonstrators converged on the Hong Kong International Airport to protest a controversial extradition bill, with the aim of informing visitors of the ongoing political unrest.

Protesters wore black and camped out at the airport's arrivals gate. The sit-in was organized by aviation workers, including airport staff and flight attendants. And it was just the latest in a series of protests that have plunged Hong Kong into political turmoil.

Protests have been going on in Hong Kong for months, most of them centered on a proposed bill that would allow people in Hong Kong to be extradited to mainland China. The bill has been tabled, but protesters want an official withdrawal announcement as well as the resignation of Hong Kong's leader, Carrie Lam.

Protests continued on Saturday, but demonstrators are now fearful of violent skirmishes. Armed men, some of whom were allegedly gang members, attacked demonstrators last weekend, and attendees say law enforcement looked the other way. Police have rejected an application for the protest on Saturday and announced that any protesters will be considered to be breaking the law.

Earlier this week, Chinese officials seemed to imply China's military could be deployed to suppress demonstrations.