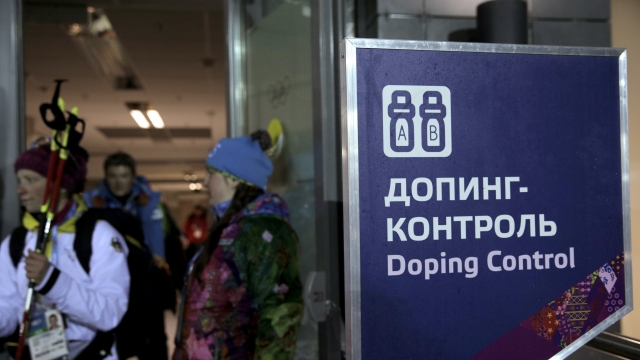 SMS
Anti-Doping Panel Suggests Russia Be Banned From Sports For 4 Years
By Adam Elrashidi
By Adam Elrashidi
November 25, 2019
If Russia is found to have violated anti-doping rules, it could face a four-year ban from global competition.
SHOW TRANSCRIPT

The panel says if Russia did violate anti-doping standards, the country will be banned from competing in the 2020 Tokyo Olympics. It would also be forbidden from hosting major international competitions, in addition to other penalties.

WADA's announcement follows the resignation of Dmitry Shlyakhtin, the former president of the Russian track and field federation, on Saturday. He stepped down after he was accused of obstructing an anti-doping investigation involving fake medical documents. It also comes four years after Russia was exposed as operating an extensive state-sponsored doping program.

In the aftermath of that revelation, the International Olympic Committee banned Russia as a country but allowed some Russian athletes to compete at the 2018 Winter Games under the banner of "Olympic Athlete from Russia." Russian athletes may be allowed to compete in Tokyo in similar fashion.

WADA had previously lifted sanctions on Russia's anti-doping agency as part of an agreement to receive the doping test results, only to discover that they had been manipulated deliberately.

Last month, Yuri Ganus, the head of Russia's anti-doping agency, told The New York Times that tests submitted to investigators may have been altered to protect former star athletes who now have roles in government or who function as senior sports administrators. He has described the situation as "the biggest crisis in Russian sports yet."