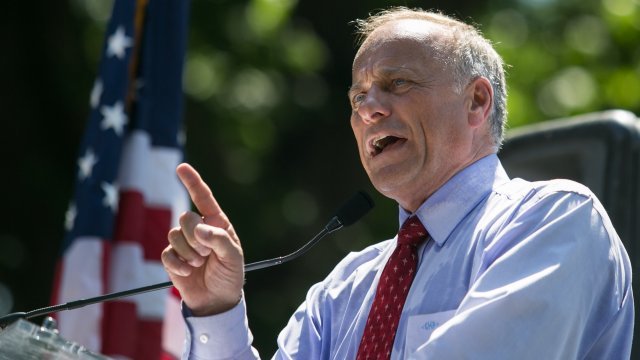 The Anti-Defamation League is calling on the House of Representatives to formally censure Republican Rep. Steve King.

The eight-term congressman is accused of making racist comments and associating with white supremacists. The ADL sent a letter to House Speaker Paul Ryan on Wednesday asking him to censure King for his "anti-Semitic and offensive" statements.

The letter says King has "an extraordinarily disturbing series of involvements" and called statements made by King "anti-Semitic and offensive not just to the Jewish community, but to all Americans."

Ryan didn't immediately respond to the request, but the National Republican Congressional Committee, which works to get Republicans elected to the House, has said it would not support King.

A tweet by the head of the NRCC said: "Congressman Steve King's recent comments, actions, and retweets are completely inappropriate. We must stand up against white supremacy and hate in all forms, and I strongly condemn this behavior."

King's history of making controversial statements regarding race goes back years, but he appears to be drawing more scrutiny following the murder of 11 people at a synagogue in Pittsburgh this weekend.

Most recently, he threw support behind Toronto mayoral candidate Faith Goldy, who believes in the concept of "white genocide" and was recently featured on a  neo-Nazi podcast. And many critics are pointing to an interview he gave in August, where he questioned the value of diversity in America. He said, "What does it bring that we don't have that is worth the price?"

In the last several days, multiple businesses have also pulled support from King, including Purina and Intel.

Kings says critiques of him are part of an attack by fake news and those who dislike Donald Trump.