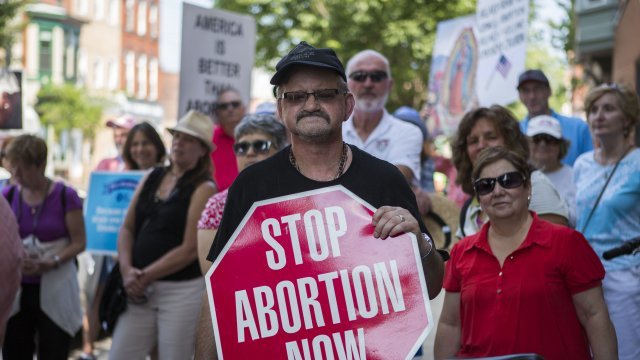 The number of Democrats in Washington who don't support abortion rights is dwindling.

The upcoming confirmation battle over Supreme Court nominee Brett Kavanaugh has again ignited one of the country's most contentious issues: abortion.

A vocal block of Senate Democrats has vowed to oppose Kavanaugh for fear his confirmation would roll back Roe vs. Wade. It's also brought another question into focus: Is there room for anti-abortion rights Democrats in today's party?

When Democrats for Life launched nearly 20 years ago, it endorsed over 40 anti-abortion Democrats in Congress. As we approach this year's midterm elections, the group has endorsed just seven Democrats — five of whom are already serving.

“I think the biggest change was when Obamacare was passed and the president promised us that there would be no taxpayer funding of abortion in health care," said Kristen Day, executive director of Democrats for Life of America. "Pro-life Democrats are Democrats, and like all Democrats, they wanted to see a health care bill passed. They worked very hard to get Obamacare passed, and unfortunately, at the end, we had this huge debate over abortion that was completely unnecessary, and it just broke the party apart."

Eight years later, dozens of the anti-abortion Democrats who were once in Congress either lost re-election or stepped down, making many wonder if they have a future in their party at all. If Missouri is any indication, there might not be room for compromise. Earlier this month, the Missouri Democratic Party removed an amendment from its platform that welcomed candidates who did not support abortion rights.

"That is the way this country is moving — as we know, a majority of voters want to keep abortion safe and legal — and certainly the way our Democratic representation is moving," said Julie McClain, senior director of campaign communications at EMILY's List.

Cases in Iowa, Arkansas and Texas are moving toward the top of the watch list.

Kavanaugh's nomination and the future of abortion rights in America have ignited voters just months before the midterms. A recent CNN survey found that just 28 percent of women and only 33 percent of Democrats want the Senate to confirm him.

"The nomination of Judge Kavanaugh has really hit home for many voters as far as what the stakes are in this election. They are tremendously high," McClain said.

Anti-abortion rights Democrats say that focusing on Kavanaugh's stance on abortion is too risky for the party and jeopardizes votes in swing states, which could hurt them in elections at every level.

"There’s not a single legislature in the South controlled by Democrats — they're all Republican-controlled. There's only one Democratic governor in the South, and he happens to be a pro-life Democrat. That's the type of person we need to run to win," Day said.