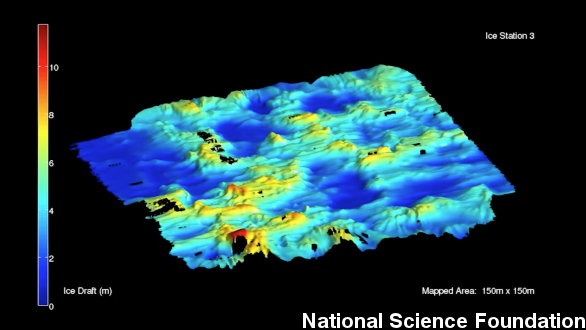 Antarctic sea ice is increasing — that's old news — but now it's also thicker than scientists thought, and that's only adding to the confusion. (Video via NASA)

A project to map Antarctic sea ice over the last four years from below using an underwater robot has produced the most detailed images of the sea ice to date, surveying an area of 500,000 square meters, or a fifth of a square mile. (Video via National Science Foundation)

For years the expanding sea ice in the Antarctic has been the focus of a lot of research, and a source of controversy, with climate change skeptics claiming it offsets the wide scale melting of Arctic sea ice. (Video via National Snow and Ice Data Center)

Lehr said, "Global warming activists like to claim global consequences resulting from carbon dioxide emissions, yet they conveniently forget to discuss the global nature of polar sea ice data. Instead, they only talk about Arctic sea ice, because that is the only polar region where sea ice is receding"

But scientists say the melting in the Arctic and the expanding ice in the Antarctic don't really balance each other out at all.

NASA's Dr. Walt Meier put it this way: "That's simply not true. If you look at just simply the magnitude of the changes we're seeing in the winter time, the Arctic is decreasing about twice as fast as what the Antarctic is increasing."

And while scientists haven't pinpointed the main cause of expanding sea ice in the Antarctic, they're not exactly clueless.

RiAus's Paul Willis said, "More rain and snow other effects of climate change could be layering the southern ocean with a cool dense layer on top. Rain and snow could also be freshening the surface waters and thus increasing the local freezing point for sea-ice formation."

Another possible reason is because Antarctic ice is based around a landmass — the continent of Antarctica — cold winds come off the continent and help form more ice, something that doesn't happen in the Arctic. (Video via NASA)

Adding to the confusion, while Antarctic sea ice is expanding as a whole, there's also a lot of melting going on, at uneven rates.

Scientists hope this first survey of sea ice thickness can pave the way for more extensive surveys in the future.