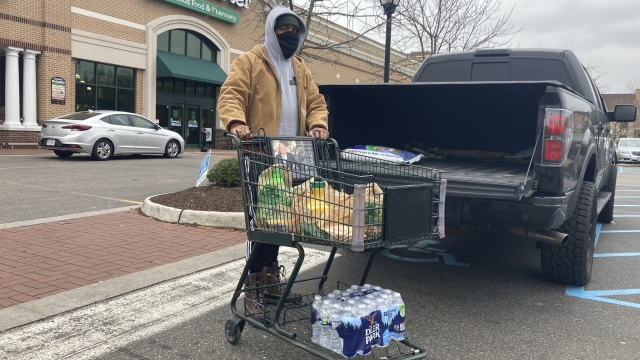 Salt spreader trucks crisscrossed coastal roads as courthouses and schools closed Friday to prepare for a snow and ice storm expected to snarl parts of the Carolinas and Virginia unaccustomed to winter precipitation.

Authorities along the North and South Carolina coast warned that ice accumulation could cause major power outages, while areas northeast of there stretching into Virginia could see several inches of snow. School districts in the pathway canceled class or went to remote learning, while several large coastal military bases told nonessential personnel not to report to work. Fifty-seven courthouses from central North Carolina to the coast closed or altered operations due to the forecast.

Transportation officials in the southeast corner of Virginia said Friday morning that crews had been working overnight to treat the roads, but warned people to stay off of them.

"Road temps are below freezing on all roads in the area, which means high potential for slick spots, black ice and slushy conditions. Stay home where it's safe and warm, unless travel is unavoidable," the Virginia Department of Transportation's Hampton Roads District said in a tweet.

In the Myrtle Beach, South Carolina, area, a fire chief warned that even walking out the front door could be treacherous.

"One of our biggest concerns are slips, trips and falls. We're not used to the ice around here as much. Be very careful just stepping out of your own home," Horry County Fire Chief Joey Tanner said.

Near Raleigh, an ambulance transporting a patient slid off an icy road early Friday, injuring two workers aboard, according to the state Highway Patrol. The patient died after the crash, but the cause of death hasn't been confirmed. The governor's office said numerous crashes were reported Friday morning after the storm's first wave, and a wave of heavier snow and ice was expected later in the day.

Forecasters predict four to six inches of snow in the northeastern corner of North Carolina and Virginia's Hampton Roads region, which includes Norfolk and Virginia Beach.

Chris Stokes, 41, a construction worker who lives in Norfolk, stocked up at a Harris Teeter grocery store Friday morning, rounding out his provisions with bottled water, eggs, chicken, wine and other items.

"I already had a couple of things, but now they're making it seem like it's gonna be a lot worse," Stokes said.

School was canceled for his kids. His construction jobs were on hold. Stokes' plan was to put some chicken in the slow cooker and assemble some toys that his kids got for Christmas.

"I bought some salt, so I'll sprinkle that outside the walkway and just kind of brace for it," Stokes said.

"Luckily, I got a 4-wheel drive (pickup truck)," he added. "So, if anything happens I'm not stuck for real. I can probably make it to where I need to go. But I'm sure nothing will be open."

"We could see up to a half an inch of ice there, and with that amount you're really starting to get into concerns about power outages," Ellis said. Ice will be a concern along the coast from Jacksonville, North Carolina, to the northeastern corner of South Carolina.

Governors in North Carolina, South Carolina and Virginia declared states of emergency ahead of the storm. North Carolina Gov. Roy Cooper, who called up more than 100 National Guard members, warned people Friday to "stay put and off the roads."

Duke Energy said in a news release that it has readied 2,500 workers around the Carolinas to help restore power after the storm, drawing crews from as far away as Florida and Indiana.

In South Carolina, areas that typically consider hurricanes their biggest weather threat were preparing for ice.

Crews treated the high, long bridges along the state's coast before the freezing rain started, warning they could become especially dangerous once freezing rain started falling Friday evening. Myrtle Beach planned to close at least one bridge for safety before any bad weather started. In Charleston, schools were closed and many offices and businesses shut down after lunch.