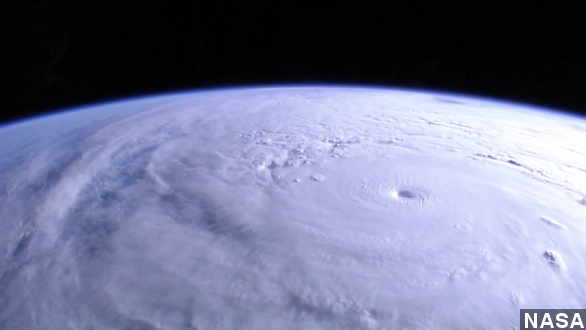 Japan is possibly in the path of another super typhoon, and it's being projected as the most powerful storm of the season. Meet Super Typhoon Nuri, which is moving along toward the eastern coast of Japan with sustained winds of 180 mph as of Sunday afternoon. (Video via NASA)

This comes a little less than a month after Japan, specifically Okinawa, took the brunt of Typhoon Vongfong, which injured dozens of people. (Video via BBC)

It's actually a been a busy few months for the region in terms of typhoons, and Nuri isn't the first to be talked up as the worst of the season.

ARI SARSALARI, THE WEATHER CHANNEL: "We've had some absolute monsters. How about Matmo that hit Taiwan? We had Rammasun that hit the Philippines and eventually China. Vongfong, strongest storm in 2014, and Phanfone was another one that hit Japan."

Phanfone killed nine people including three U.S. airmen who died after the storm swept them out to sea while they were taking pictures of the waves.

And although Nuri is projected to surpass Phanfone for strength, its current path should steer it clear of dealing serious damage to Japan.