Another Study Suggests Viagra Is Good For The Heart 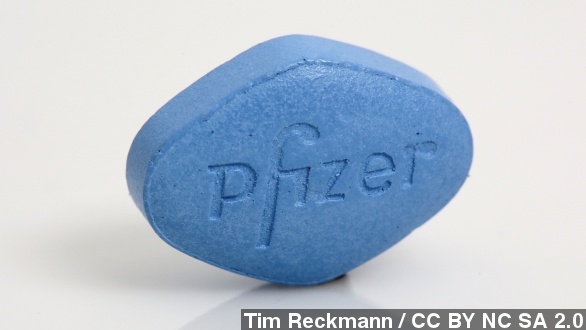 SMS
Another Study Suggests Viagra Is Good For The Heart

By Christine Slusser
October 20, 2014
An ingredient in erectile-dysfunction medications such as Viagra could improve heart function. Perhaps not surprising, given Viagra's history.
SHOW TRANSCRIPT

That little blue pill known for helping guys out in the bedroom could help their hearts, too.

In a study published Oct. 20 in BioMed Central, researchers worked with 1,622 subjects and gave some PDE5i, an ingredient in erectile-dysfunction medications like Viagra. Overall, researchers saw improved heart performance in patients who took it.

And since the pill is on the market and, as The Telegraph points out, known to be safe, researchers say there's no reason heart disease treatments with Viagra couldn't become a practice, say ... now.

"The analysis shows that PDE5i prevented the heart increasing in size and changing shape in patients suffering from left ventricular hypertrophy, a condition which causes thickening of the muscles in the left ventricle."

"The sexual performance booster was originally tested as an aide to the heart."

The headlines for this were pretty fun, too, saying Viagra doesn't just perform in bed; it's time to "forget sex"; and hey — get a heart on with Viagra.

The study also showed patients had few side effects like drops or rises in blood pressure or photosensitivity.

However, this isn't exactly a breakthrough. In 2007, a different study was conducted that also proved Viagra helped improved heart function.

So, why, seven years later, are we still trying to figure out if Viagra should be used to treat heart disease?

NBC spoke to a specialist who says different studies are giving us different info. "As interesting as this paper is, there have been conflicting results. ... If there is a silver bullet, it remains to be seen."

Several researchers point to a need to experiment on the benefits with different racial groups and men vs. women. Researchers say for this most recent study, larger clinical trials would help build on the findings.