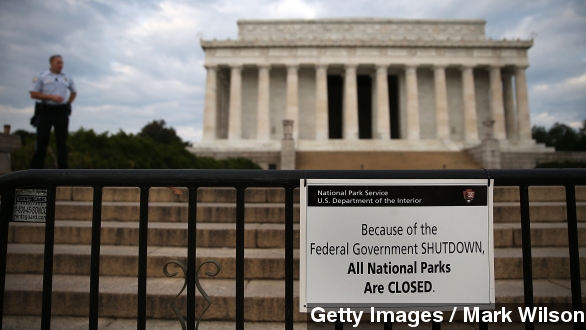 The midterms were weeks ago, but new lawmakers won't be in Washington until January. And the infighting apparently isn't over for the current Congress.

VIA FOX NEWS: “Could the president’s executive action on immigration turn a DC showdown into a government shutdown?”

VIA CNN: “And what’s worse is that this particular fight could lead to a government shutdown next month.”

VIA MSNBC: “I spoke to a few Republicans today — guys that said a government shutdown should remain on the table.”

Yes, after 2013’s government shutdown cost the U.S. $24 billion, we might be on the cusp of another one over immigration reform within the next month.

SPEAKER JOHN BOEHNER VIA C-SPAN: “We’re going to fight the President tooth and nail if he continues down this path. ... All of the options are on the table.”

And it looks like President Obama does plan to continue down this path on immigration.

PRESIDENT OBAMA VIA THE WHITE HOUSE: “I gave the House over a year to go ahead and at least give a vote to the Senate bilaterally; they failed to do so.  And I indicated to Speaker Boehner several months ago that if, in fact, Congress failed to act, I would use all the lawful authority that I possess to try to make the system work better.”

The shutdown comes in to play because of the omnibus spending bill that’s due to be ruled on Dec. 11. Republicans hoping to block Obama’s executive action plan to make part of the bill do just that.

And if it doesn’t get passed? The government shuts down. So how likely is it that we’ll get to that point?

SENATOR MITCH MCCONNELL VIA CNN: "Let me make it clear there will be no government shutdowns and no default on the national debt."

But an editorial in The New York Times says that could change if Republicans can blame the shutdown on Obama by putting a spending bill on his desk for a veto.

Last year's spending bill never made it that far. The Democratic Senate blocked the spending bill — keeping the president out of it and making Republicans look like the root of the problem.

But The Hill notes not all Congressional Republicans are on the same page as Boehner, with some worried their party will receive the same bad publicity it did last time.

That bad publicity meant 53 percent surveyed in a Washington Post-ABC news poll blamed Republicans for the 2013 shutdown, while only 29 percent blamed President Obama. Then again, the GOP's strong showing in midterms this month suggests that didn't mean so much at the polls.