Another Doctor With Ebola Arrives In U.S. For Care 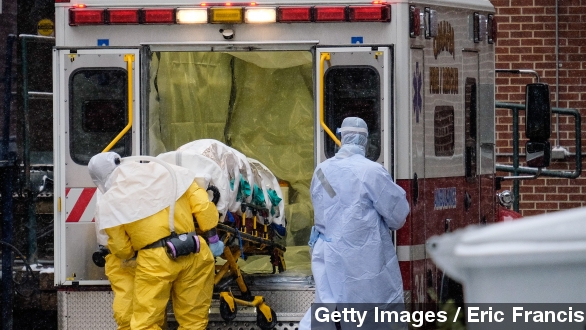 SMS
Another Doctor With Ebola Arrives In U.S. For Care
By Matt Picht
By Matt Picht
November 15, 2014
Dr. Martin Salia, a U.S. resident who contracted Ebola while working in Sierra Leone, has been airlifted to Nebraska Medical Center for treatment.
SHOW TRANSCRIPT

Another healthcare worker who's been diagnosed with Ebola arrived on U.S. soil for treatment Saturday.

DR. MARTIN SALIA VIA YOUTUBE / UNITED METHODIST VIDEOS: "I took this job not because I wanted to, but I firmly believe that it was a calling and that God wanted me too."

Dr. Martin Salia, a Maryland resident who caught the disease while working as a surgeon in Sierra Leone, was transported to Nebraska Medical Center, one of four U.S. hospitals designated to treat Ebola patients. (Video via WOWT)

Salia will be the third Ebola patient to be treated at Nebraska Medical Center. The hospital previously treated Dr. Rick Sacra and freelance NBC cameraman Ashoka Mukpo, both of whom recovered from the disease.

He's also the tenth person to be treated for Ebola in the U.S. Eight of the other nine Ebola patients managed to survive the virus that's claimed 71 percent of victims in West Africa, thanks in part to the U.S.'s more advanced medical system.

But WJZ spoke to Salia's family in Maryland earlier in the week, and they have faith that he'll pull through.

MAADA SALIA: "So far he's responding very well to treatment, and he's doing very well, so I have no doubt that everything will come out successfully."

Salia's arrival breaks the brief period where the U.S. was free of infected Ebola patients, which began Tuesday with the release of Dr. Craig Spencer. (Video via CBS)