Another Arrest Made In Connection To 39 Bodies Found In Truck 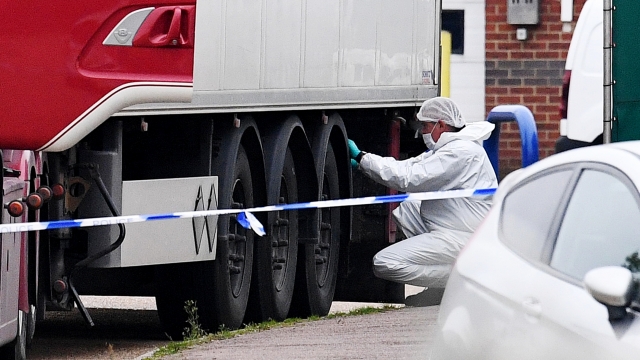 SMS
Another Arrest Made In Connection To 39 Bodies Found In Truck
By Caitlin Baldwin
By Caitlin Baldwin
November 22, 2019
The arrest is in connection to the deaths of 39 people discovered in the back of a truck last month in England.
SHOW TRANSCRIPT

Another suspect has been arrested in connection to the discovery of 39 bodies in a truck container last month in England.

Thames Valley Police arrested a 23-year-old man from Northern Ireland Friday morning on behalf of Essex Police. Essex Police says the man was arrested on suspicion of conspiracy to traffic people and conspiracy to assist unlawful immigration. He has not been named and remains in police custody.

Police discovered the bodies inside the refrigerated truck — 31 men and eight women, all Vietnamese — back in October. Every victim has been identified, but it's still unclear what caused their deaths.

This is one of many arrests made in the investigation. Essex Police first arrested the 25-year-old suspected driver of the truck. He faces 39 counts of manslaughter, as well as human trafficking and immigration offenses. Three others were arrested by Essex Police but have since been released on bail. And Vietnamese authorities have made eight arrests connected to the investigation.