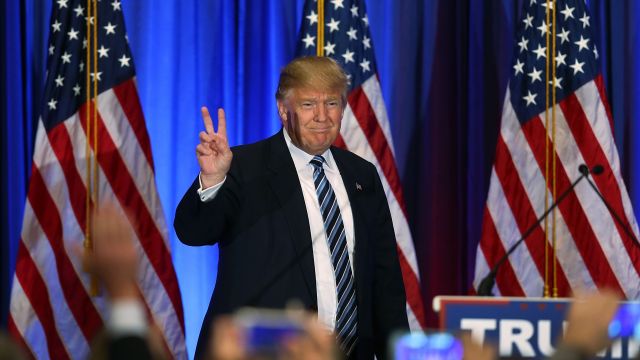 SMS
Anonymous Says It Just Released Some Of Trump's Very Personal Info
By Katie Link
By Katie Link
March 17, 2016
For the record — when we called the cellphone number listed, it went straight to voicemail.
SHOW TRANSCRIPT

Someone's phone has been ringing off the hook today. And if the hacker collective group Anonymous did its homework, that phone belongs to Donald Trump.

Days after Anonymous declared what it called "total war" on the Republican front-runner, a new video supposedly from the group surfaced.

"Donald Trump has set his ambitions on the White House in order to promote an agenda of fascism and xenophobia as well as the religious persecution of Muslims through totalitarian policies," the speaker said.

The five-minute-long video ends with the masked speaker describing a "gift of sorts" — instructions on where to find Trump’s Social Security and cellphone numbers. They're calling it "Operation White Rose."

Since the information is coming from an anonymous source, it's hard to tell whether it's valid. So maybe think twice before you try any prank calls or identity scams with the data.

Apparently, even so-called members of the loosely organized group have some doubts.

Anonymous did get some facts right though; the group listed the names of Trump’s agent, lawyers, parents and children in the data dump that was made public Thursday. Since that information is publicly available, it's much easier to fact check.