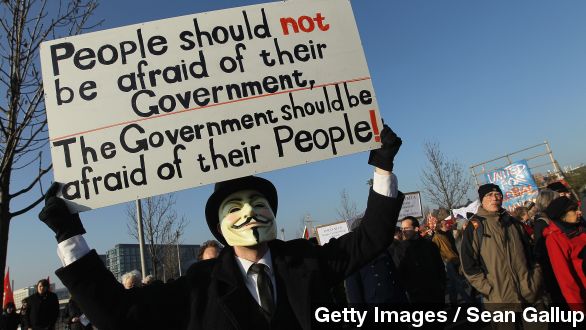 In a video posted to YouTube, the group vowed to shut down all social media networks and websites associated with terrorist groups. They warned, "against us, you can do nothing."

Despite beginning as a group that hacked purely for fun, Anonymous has grown to produce politically refined critiques, question the trustworthiness of government and entertainment organizations and earn a certain level of clout on social media.

Anonymous advocates for free speech across the globe and blatantly called the Charlie Hebdo attacks a failure as French Muslims have not been rallied to commit similar acts in the name of jihad.

Back in June, the group shut down the 2014 World Cup website in Brazil to protest corruption, poverty and police brutality.

And Anonymous leaked information in the Steubenville, Ohio rape case in 2013, urging that the offending parties be prosecuted.

Anonymous has been both praised and vilified for its work. While some see the network as an important group of free speech and social justice crusaders, others have called Anonymous a group of criminals for planning hacks on several U.S. government databases.

After being caught by the FBI, a former Anonymous hacker named "Sabu" went on to act as an informant. When asked if he could go back and change things, he had this to say about the group:

"I would stay away from Anonymous."

"It was just too much publicity," Sabu said.

When protests in Ferguson began in August, the group issued a warning to police and told protesters not to be afraid, stating, "we are the law now."

The group also falsely identified a police dispatcher as the shooter in Michael Brown's death, before Darren Wilson's name was released.

Although a new book about Anonymous puts it in the same category of Internet power players like Julian Assange, a writer for Ars Technica said, "It seems that the group has largely just fizzled out."

While Anonymous's planned hack applies to all Islamic extremist groups, AQAP, the Yemeni branch of Al Qaeda, has taken responsibility for the Charlie Hebdo attacks.