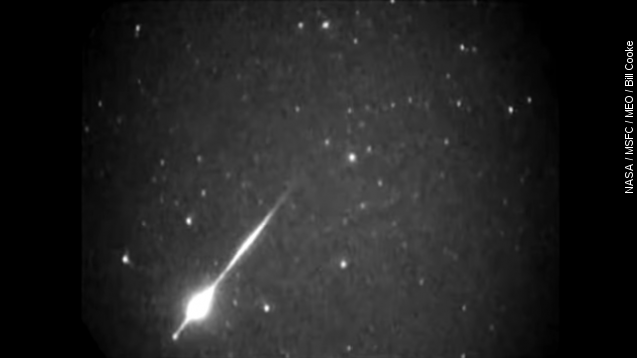 SMS
Annual Leonids Meteor Shower's Timing Is Good This Year
By Jillian Deutsch
By Jillian Deutsch
November 16, 2015
The Leonids meteor shower is set to peak Tuesday night, and the moon just happens to be in the perfect position to allow clear viewing of the shower.
SHOW TRANSCRIPT

Tuesday night, you may want to put away Netflix and see a show outside instead.

NASA says the Leonids meteor shower is expected to peak around midnight Tuesday and last until dawn Wednesday. (Video via NASA)

If the sky is clear and you're away from light pollution during the peak time, NASA predicts you'll see about 15 meteors an hour.

This meteor shower gets its name from the Leo constellation because the "meteors radiate outward from the vicinity of stars representing the Lion’s mane," according to EarthSky.

The meteors are really bits of leftover debris from the Comet Tempel-Tuttle, which comes through our solar system every 33 years.

The Leonids typically fill the sky every November, sometimes bringing a meteor shower. Though we're not expecting to see a full-blown shower this year, the moon is in a perfect position to allow clear viewing of the shower.

If you miss it Tuesday, there's no need to worry. The shower will continue until the end of month — it just might take a bit more squinting to see it.

This video includes images from Getty Images and Perry McKenna / CC BY 2.0.