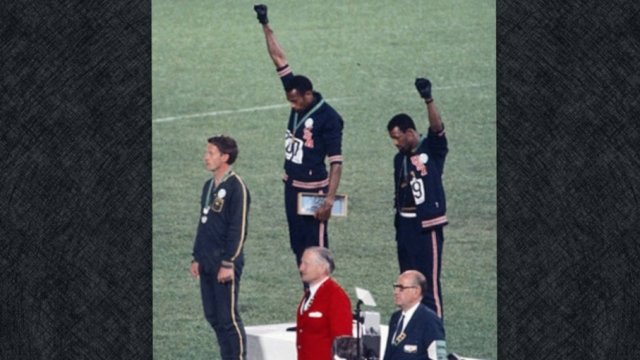 Tommie Smith and John Carlos made history in October 1968 with their iconic bowed heads and raised fists during the national anthem.

As the national anthem protests in the NFL reopen the discussion about political statements in sports, the anniversary of one of the most iconic such demonstrations quietly passed by.

On Oct. 18, 1968, Olympic athletes Tommie Smith and John Carlos were suspended from the U.S. team. Two days earlier, the men made international news when they each raised a black-gloved fist and bowed their heads during the playing of "The Star-Spangled Banner."

NFL players have repeatedly said the #TakeAKnee protest is aimed at drawing attention to racial inequality and police brutality. Smith and Carlos said they wanted to send a message about racism and poverty.

The two men each wore one hand of the same pair of gloves; their pose is considered a classic black power salute, although Smith later wrote the salute was about human rights.

They each wore a scarf and bead necklaces to protest lynchings and symbolize black pride. Before taking their spots on the victory podium, the two men removed their shoes to reveal black socks, a symbol of black poverty.

A White House official said NFL players should "do free speech on their own time." But historically, sports and politics have gone hand in hand.

Smith said afterward that "white America" would only celebrate his victory for the U.S. until he "did something bad." Carlos said, "We feel that white people think we're just animals to do a job."

Carlos and Smith each went on to have short NFL careers after being suspended from the track team.

The de facto leader of today's NFL protest, Colin Kaepernick, is currently accusing the league of blacklisting him for his protests.