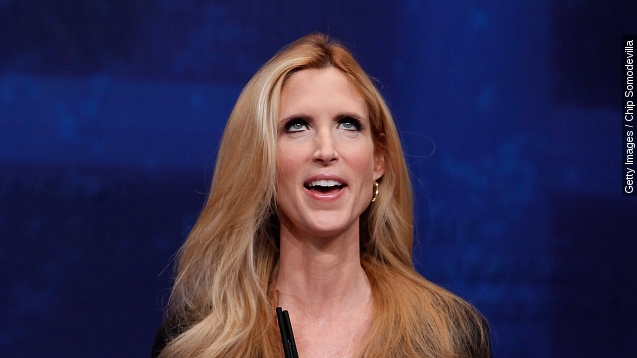 SMS
Ann Coulter Makes 'Anti-Semitic' Remark During GOP Debate
By Jake Godin
By Jake Godin
September 17, 2015
Ann Coulter made a remark during the GOP debate that many are calling "anti-Semitic" — it's not the first time her commentary has run afoul either.
SHOW TRANSCRIPT

On the list of things not to do during a highly televised, much publicized debate — tweeting something that could be construed as anti-Semitic is probably near the top.

And yet, that's what Ann Coulter did as the 11-person CNN debate raged on. (Video via Ronald Reagan Presidential Foundation and Library)

Her tweet read, "How many f---ing Jews do these people think there are in the United States?" — a reference to what she says was a gratuitous amount of pandering to Israel done by the candidates.

The tweet, like much of Coulter's incendiary commentary, didn't go over so well, and more than a few people called it anti-Semitic.

And this remark is just the latest in what The Daily Beast's Tom Skyes calls her transformation into "Rush Limbaugh after a David Duke seminar."

This was Coulter in an interview with Donny Deutsch, who is Jewish.

"I mean, let's wipe Israel off the Earth. What, no Jews?" Deutsch said.

"No we think, we just want Jews to be perfected," Coulter answered.

Right. Coulter has so far defended her GOP debate remark as being pro-Semitic and anti-pandering.