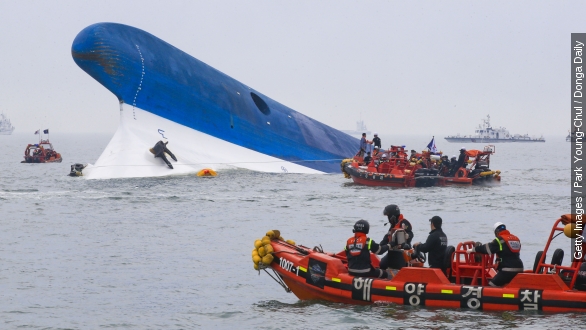 On the one-year anniversary of the Sewol ferry disaster, South Korean President Park Geun-hye announced authorities will raise the ship. (Video via Arirang)

Two hundred and ninety-five people died, with a further nine missing, when a ferry sank off the country's southern coast. (Video via CNN)

Authorities convicted the ferry's captain along with 14 other crew members on a range of charges and said the ship was overloaded with cargo, causing it to capsize after a sharp turn. (Video via CCTV)

But the government's actions in response to the sinking, along with the investigation that followed, have drawn anger from the parents of the dead, many of whom were students. (Video via ABC Australia)

The ship was carrying some 325 students from a high school south of Seoul when it sank. Two hundred and fifty of them died.

In the weeks leading up to the anniversary, parents of some of the victims have protested and publicly shaved their heads, as NPR's Elise Hu reports. (Video via YouTube / Elise Hu)

"It's an Asian tradition showing determination. ... They've occupied Seoul's central square, pressing for the full and independent investigation Park Geun-hye promised in the days after the ship went down," Hu said.

Raising the ferry to recover the missing bodies is just part of their demands. Parents have also accused Park's government of trying to influence the investigation by appointing officials to key posts in the investigation. (Video via Channel NewsAsia)

The disaster has seriously damaged public perception of Park, as well. Her approval ratings have dropped by more than 20 points to under 40 percent since the sinking. (Video via C-SPAN)

And Park's announcement doesn't appear to have done much to soothe that anger — family members blocked government officials from some memorial sites on Thursday. (Video via Yonhap News Agency)