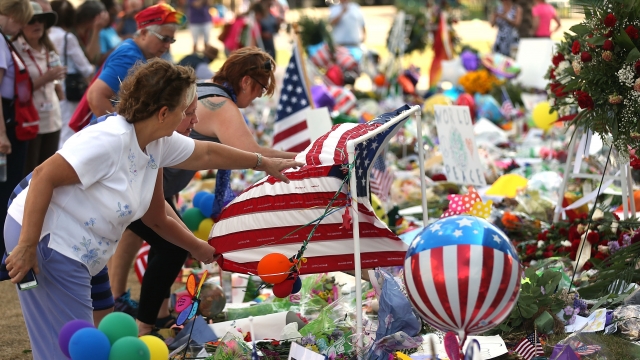 As family and friends said goodbye to two of the Orlando shooting victims, hundreds of strangers, including some dressed as angels, showed up to lend their support. They shielded family and friends from the Westboro Baptist Church.

A few members of the anti-gay church group stood outside the church where the funeral for Christopher "Drew" Leinonen and his boyfriend Juan Ramon Guerrero was taking place. Leinonen and Guerro were just two of the 49 people killed in the shooting at Pulse, an LGBT nightclub, on June 12.

Members of the Orlando Shakespeare Theater made angel costumes for some of the counterprotesters.

"What we want to do is block out hate with love," Jim Helsinger, the artistic director of the Orlando Shakespeare Theater told WOFL.

Angel Action wings have appeared at other funerals where anti-gay groups have protested. The founder started the movement in 1999 to counterprotest the Westboro Baptist Church's presence at the trial of Matthew Shepard's killers.

Orlando police eventually escorted the Westboro protesters away to the loud cheers of the crowd.

The June 12 shooting injured 53 others. The incident is considered the deadliest mass shooting in American history.