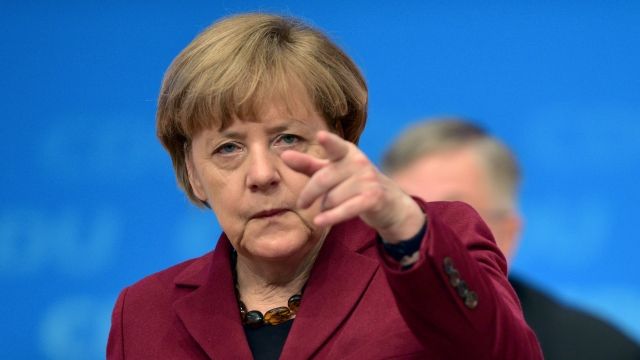 For the first time, German Chancellor Angela Merkel is aligning with right-wing sentiment in Europe by announcing her support for banning full-face coverings, including burqas.

Merkel was reportedly met with "overwhelming applause" at her party's convention when she said the traditionally Islamic garment "is not appropriate" in Germany and "should be forbidden wherever that is legally possible."

SEE MORE: France's Highest Court Has Overturned At Least One Ban On Burqinis

A full-on burqa ban likely won't be allowed by Germany's constitution, but the clothing could be outlawed in public places like schools and airports and behind the wheel.

Several other countries near Germany, such as France, Italy and the Netherlands, ban the burqa in at least some cities. Experts estimate there might only be a few hundred women who actually wear burqas in Germany.

Merkel is known as a fairly moderate and tolerant politician, so this proposal might have less to do with her own beliefs and more to do with appeasing critics ahead of the 2017 election.

During the refugee crisis, Germany took in lots of migrants. And now, many German citizens aren't happy about it.

Popularity for helping migrants waned after several terrorist attacks and an incident where dozens of women said they were groped and robbed by men described as Arabic at a New Year's festival in Cologne.

The anti-Islamic nationalist party AfD is gaining steam leading up to the election. Merkel is showing she's willing to shade further to the right to try and get a fourth term after her party was soundly defeated in recent local elections.