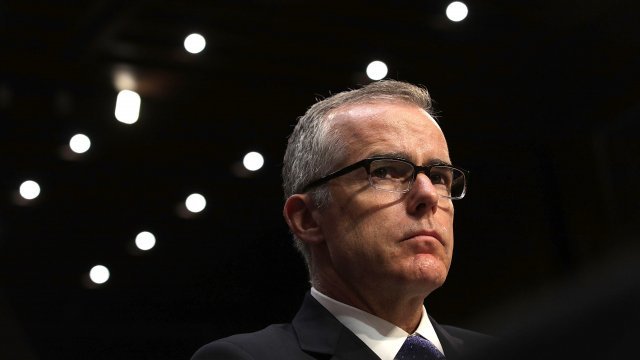 SMS
Former FBI Deputy Director Andrew McCabe Is Suing The DOJ
By Gabrielle Ware
By Gabrielle Ware
June 12, 2018
A lawyer for McCabe filed a complaint Tuesday claiming the DOJ, its inspector general and the FBI were withholding documents on his firing.
SHOW TRANSCRIPT

Former FBI Deputy Director Andrew McCabe is suing the FBI, the Justice Department and the DOJ's inspector general. A lawyer for McCabe filed a complaint Tuesday.

Attorney General Jeff Sessions fired McCabe in March, less than two days before he was set to retire. That cost McCabe a guaranteed pension on his 50th birthday after more than two decades at the FBI.

The complaint says the DOJ, FBI and inspector general have repeatedly refused to give McCabe documents related to his termination. It says the refusals stem from fear those documents could be used against the DOJ in the future.

Sessions said he fired McCabe for "lacking candor" on the job. But McCabe says his firing was an attempt to discredit him before his potential testimony to special counsel Robert Mueller.