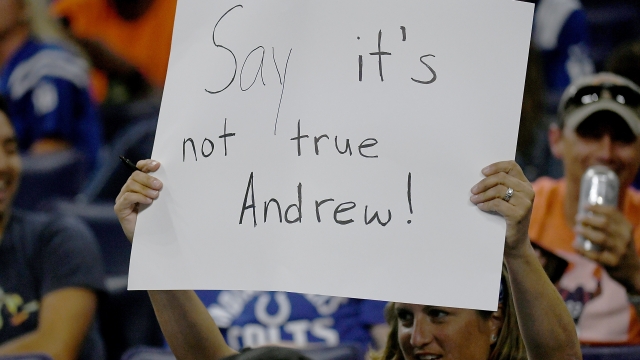 SMS
A Hurting Quarterback Quits The Game, Signaling Injury Worries For NFL
By Peter Hecht
By Peter Hecht
August 27, 2019
Luck said the toll of injuries and recovery cost him his love of the game.
SHOW TRANSCRIPT

Andrew Luck came into the National Football League as a legend-in-the-making, a formidable star out of Stanford University.

And in six seasons with the Indianapolis Colts, Luck led his team to a record of 53-33 and threw 171 touchdown passes, leading the league with 40 in 2014.

But Luck is walking away from the game due to these career stats: A lacerated kidney, a torn abdominal muscle, torn rib cartilage, a concussion, shoulder surgery that cost him the 2017 season and a injured ankle that threatened this one.

Luck has made nearly $100 million playing in the NFL. But neither money nor fanfare could relieve his cycle of pain and recovery. And today's NFL players know the costs.

For every Tom Brady or Drew Brees, quarterbacks playing into their 40s, there are hundreds of broken-down retirees. Jim McMahon won a Super Bowl with the Chicago Bears and now battles dementia from concussions. Jim Plunkett won two for the Oakland and Los Angeles Raiders and lives in daily pain from his neck to his hips and knees.

Players today know about the risk of chronic traumatic encephalopathy or CTE. The degenerative disease, linked to repeated blows to the head on the gridiron, was dramatized in this 2015 movie, Concussion.

"I am the one person to have discovered this."

"If you don't speak for them, who will?"

So Andrew Luck walked away. He has money in the bank, and a Stanford degree in architectural design. And yet it wasn't easy.

"I'm in pain. I'm still in pain. I've been in this cycle, which feels like...I mean it's been four years of this injury, pain, rehab cycle. And for me to move forward in my life the way I want to, it doesn't involve football."

Walking away early may be the new normal. Tight end Rob Gronkowski of the Super Bowl champion New England Patriots just quit at 29 after multiple broken bones and surgeries. Calvin Johnson, all pro-receiver for the Detroit Lions, left the game in 2016 at age 30, fed up with chronic injuries and painkillers given "out like candy." And a top rookie linebacker, Chris Borland, retired after just one season with the San Francisco 49ers, citing fears of cumulative head trauma.

Yet there is a price to pay for quitting this game prematurely. He walked off the field Saturday, amid thunderous boos from the home fans.

Robert Griffin III, a once ascending quarterback star before multiple devastating injuries made him a bench warmer, says some fans will never understand. "We're looked at as superheroes," he said, "and not human beings."