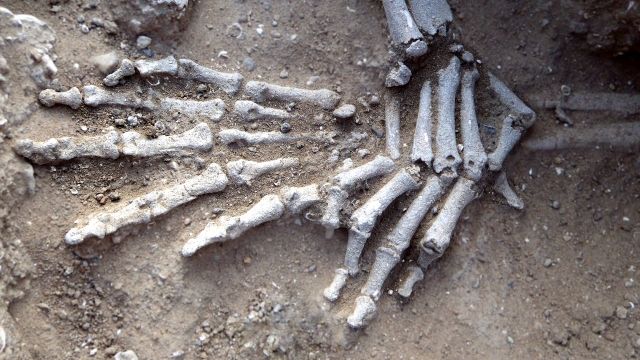 At least 10,000 years old, to be exact. Several skeletons, found at a place called Nataruk, have injuries consistent with violence.

According to archaeologists, several of the skeletons were found face down with injuries that looked like arrow wounds. Others had broken bones and most had severe cranial fractures.

So why is this significant? Well, scholars have long debated when warfare became a pattern in human culture. And putting a time stamp on it is pretty hard do since all of the evidence is thousands and thousands of years old.

The researchers in this case say the 10,000-year-old gravesite indicates so-called "intergroup violence" may have been carried out in prehistoric hunter-gatherer societies.

"The chances that you will find the remains of a fight, of a war, of an attack are very, very remote, so that makes Nataruk extraordinarily special," archaeologist Marta Mirazon Lahr said.

Prior to these remains being found, our best guess at when war originated came from a different gravesite discovered in modern-day Sudan. Unlike the discovery at Nataruk, the cemetery in Sudan suggests the community there was fairly settled.

The co-author in this study said, "I've no doubt it is in our biology to be aggressive and lethal, just as it is to be deeply caring and loving. A lot of what we understand about human evolutionary biology suggests we are two sides of the same coin."