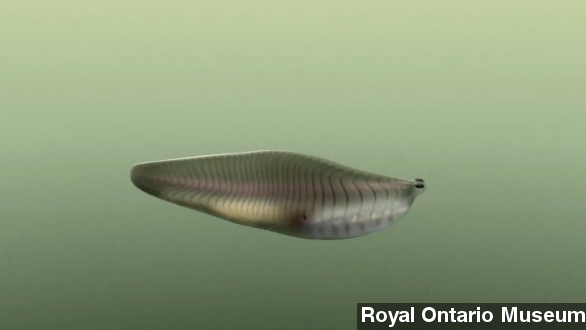 By Steven Sparkman
June 11, 2014
Metaspriggina, a 500-million-year-old fossil, is one of the earliest-known vertebrates and may be the first fossil showing the evolution of the jaw.
SHOW TRANSCRIPT

The Cambrian Explosion was a time in Earth's history when some of the weirdest-looking animals ever could be found swimming around the oceans. And now scientists say one of those oddities could be the ancestors of fish, mammals, birds, reptiles ... pretty much everything. (Via Wikimedia Commons / Talifero, Nobu Tamura)

This little guy, about the size of a human thumb, lived 500 million years ago and has some of the earliest features that would come to define vertebrates: eyes, a nose, a tail, a precursor to a spinal cord and, possibly, the first step toward a working jaw. (Via Royal Ontario Museum)

The scientists found it here, at Kootenay National Park in the Canadian Rockies, which has a treasure trove of ancient fossils. (Via Wikimedia Commons / Florian Fuchs, Yetiwriter)

In a new study, scientists at the Royal Ontario Museum highlight one of the fossils that shows the tiny fish's features in unprecedented detail.

The lead researcher tells the Toronto Star there were a few surprises. "I was like, 'what!? This thing had eyes?' I had no idea."

It would have needed them, too, to avoid predators like this 7-foot-long beast, the king of the oceans in those days. (Via Wikimedia Commons / H. Zell)

But the study, published in Nature, also says the fossil fits what some scientists think an animal with the precursor to jaws would have looked like.

Jaws gave vertebrates the ability to actually hunt and chew prey, rather than just filter-feeding along the ocean floor, so the new fossil find may show the beginnings of one of the biggest evolutionary shifts in history. (Via BBC)

The lead researcher called it "stunning find," adding "In some ways, you can recognize yourself in there. ... He has all the features that all vertebrates will eventually share." (Via CBC)

The team say they believe there are many more fossils where this one came from, and are planning to do some more digging this summer.