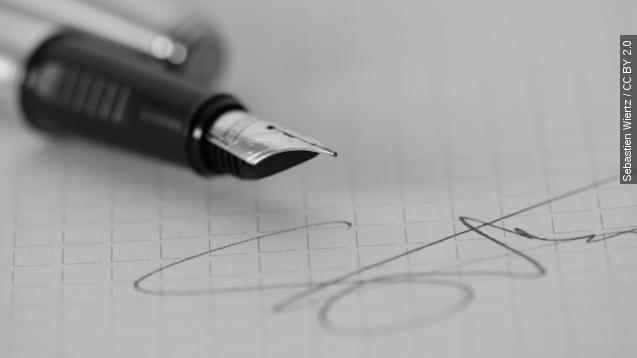 Have you ever wondered what the 2016 presidential candidates are trying to tell us through the the loops and dots of their signatures? Yeah, me neither, but Politico's got the answers anyway.

The outlet had a handwriting expert study the signatures of candidates to define their personality quirks. The results are unsurprising: Hillary Rodham Clinton sings her middle name because she wants to remind us she's her own person, Jeb Bush wants people to focus less on his last name, Ted Cruz's thick-toned writing proves he is "determined and dogmatic," and the oversized "P" in Trump is apparently a "large phallic symbol [which] shouts, 'Me … big hunk of man.'"

If those analyses sound familiar, they should — political pundits have been making similar critiques about each candidate since the race began. Handwriting analysis might be a fun diversion, but it doesn't really tell us anything we haven't already heard. (Video via HBO,MSNBC,NBC,Fox News)

So, if we're just getting the same information over and over, why even bother? Every election cycle, we tend to use weird metrics to answer the age old question: Who in their right mind wants the hardest job on Earth?

Take probably the most used metric: body language. "The verbals here are that Jeb Bush is saying 'absolutely I do' but he's shaking his head no. These are contradictory messages," a body language expert told KTVI.

"What do you think she's doing wrong with her hands?" CBS' Maggie Rodriguez asked.

"One of the things that you see is she has very limited hand gestures. And we look for hand gestures to tell us what's important," Former FBI Joe Navarro said.

"He does a lot of pointing," CNN's Anderson Cooper said to a body language expert.

Oh no! We have a pointer, folks! Seriously though, with how coached and careful some politicians are with their speech, analysts often turn to more esoteric methods to get beyond the talking points..."Is he really a family man?" "Does she really have my best interest at heart?" (Video via Fox News, CNN)

Studying body language and handwriting samples give us the illusion we can indeed know the unknowable: what someone is truly like. Until then, someone will probably keep trying to guess how that cursive loop can translate to a vote.