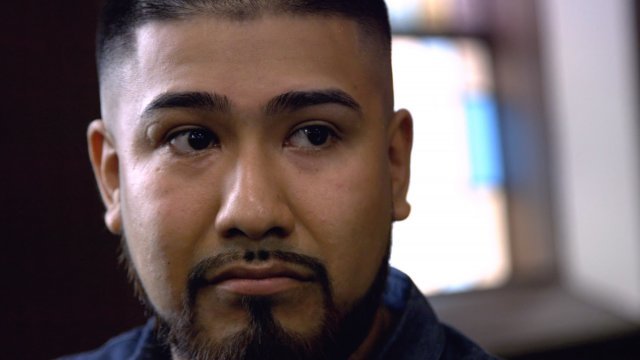 SMS
This Immigrant Is Fighting Chicago Police Over Alleged Gang List Error
By Ben Schamisso
By Ben Schamisso
October 2, 2017
An undocumented immigrant is suing Chicago to get his name off the city's controversial gang list, which could protect him from being deported.
SHOW TRANSCRIPT

Luis Vicente Pedrote-Salinas spent six months in immigration detention after federal agents raided his parents' home in Chicago and arrested him in 2011.

"It was 1 a.m. in the morning; I was ready for sleep, for the next day of work. I went down, putting on some shorts, not even a shirt. And for some reasons, they had assault rifles," Pedrote-Salinas said. "I just thought that I was gonna be let go, just like one day jail cell or something like that. Something random. Something not right. I had no idea they were ICE or immigration."

Pedrote-Salinas, who is undocumented, has been living the U.S. since he was 5 years old when he was smuggled across the Arizona border with his mother. As a working resident of a so-called sanctuary city, he didn't expect Immigration and Customs Enforcement to come after him. What he didn't know: Chicago police had identified him as a gang member, which led ICE to target him. But Pedrote-Salinas says he was never part of a gang.

"The only way I differentiated myself was just by being busy with school, busy with homework and tired — just tired at school and no time for gangs, no time for other people that are gonna make your life worse," explained  Pedrote-Salinas.

"We're hoping for some kind of relief just by them admitting, 'You know what? We made a mistake he's not a gang member.' Just set me free," Pedrote-Salinas said.

The City of Chicago doesn't comment on pending litigation. Still, a city official told Newsy that "Chicago will continue to be a welcoming city ... for immigrants and refugees from around the world for generations."

A few months before the 2011 ICE raid, the CPD arrested Pedrote-Salinas for possession of liquor as a minor. That's because they saw an unopened can of beer in the cup holder of his parked car, according to court documents. Pedrote-Salinas was released the next morning and the charges against him were later dismissed. Still, the local officers wrote in their report that Pedrote-Salinas self-admitted to being a gang member. But the lawsuit claims that report was fabricated.

"In most cities, gang members are involved disproportionately in violent crimes, in particular shooting and homicides. That's certainly the case in Chicago," said professor Arthur Lurigio from Loyola University Chicago. "So, police having specialization and different strategies for identifying gang members, for managing gang members' activities and for being in an advantageous position to arrest gang members following shootings and homicide, certainly is state-of-the-art efficient police work. This isn't anything new," he continued.

Gang databases are used by law enforcement as intelligence across the U.S. and at all levels of government. Authorities add individuals they conclude are gang members to these databanks often because they self-identify as such, wear indicative clothing or tattoos or are seen hanging out with other known gang members.

"And you might also want to note that the constellation of gangs have changed," said Lurigio. "It isn't you are a gang member or you aren't a gang member. It's degrees of membership, with some hardcore all the way to some aspiring wannabes at the fringes and even beyond the fringes; people who grew up in the neighborhood, who know one another, who stop and talk, say hello."

Lurigio continued: "The possibility for error is greater in one direction than the other. In other words, falsely identifying someone as being a gang member when they're not. The other kind of error is failing to identify gang members when they are."

Concerns over inaccuracies and lack of oversight of gang databases are not limited to Chicago. After a 2016 audit of California's gang database found it heavily flawed, Gov. Jerry Brown signed a bill to increase public accountability and to let individuals challenge their inclusion. And a few weeks ago, Portland police announced they will stop using their gang list altogether to improve relationships with black and Latino communities.

After Pedrote-Salinas spent six months in a detention facility in Texas, his lawyer managed to release him on bond in 2012.

"I saw stars, beautiful stars. The night, I finally saw the night," said Pedrote-Salinas. "I came home in shorts and it was snowing already in Chicago."

As Pedrote-Salinas is fighting via the lawsuit to get himself off the CPD gang database, his chance to remain in the country will be determined during his next immigration hearing in August 2018. Faced with the reality that he could one day be deported, Pedrote-Salinas turned to his local priest for mental support.

"All this fighting, you know, 'You might lose and you're not gonna win, you're still gonna get deported' and I broke down and he helped me, he brought me back up," said Pedrote-Salinas. "He always kept telling me, there's people that lose hope, but we'll help you, we'll protect you — and he kept his words. And from bad news to good news, I'm just trying to live my life and be happy," he said.