An Ancient Star Gave Earth A 'Close Call,' But How Close? 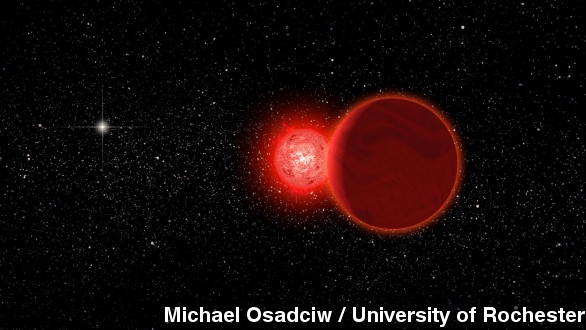 We don't tend to think of stars moving through space like comets, but scientists have found evidence that a red dwarf star, like this one, passed through our solar system just 70,000 years ago. (Video via NASA)

This is an artist's rendition of the visitor, a red dwarf binary system whose official name is really long and kind of hard to say, but it's also known as Scholz's star, so that's what we're going to call it from here on out.

Stars, like planets, have their own orbits; our sun orbits around the center of the Milky Way galaxy. But the thing is, galaxies are huge, so those orbits take a long time — 250 million years in the sun's case. (Video via NASA)

Researchers at the University of Rochester calculated Scholz's star's past trajectory and found that it would've passed through the Oort cloud, in the farthest reaches of our solar system.

The Oort cloud is a huge field of icy objects surrounding what we generally think of as our solar system — the sun, the planets, etcetera — and stretching on for thousands of astronomical units.

How far is 4.8 trillion miles? Well it's close to 2,000 times as far as our nearest planet: Neptune — so far. (Video via RLScience)

In fact, if we go back to that artist's illustration of Scholz's star, that bright star out on the left, that would be our sun.

Still — despite being so, so far out — the star's flyby could have posed a threat to the Earth, specifically in the form of comets. (Video via NASA)

Scientists believe the Oort cloud is the birthplace of many of the comets that pass by the Earth, so the passage of a massive body, like a star, through the cloud could've set off comet showers, which can cause extinction events on Earth. (Video via European Southern Observatory, Discovery)

The researchers believe flybys, like the one Scholz's star did, happen every 100,000 years or so. So if you want to catch the next one, just stick around for another 30,000 years. (Video via NASA)