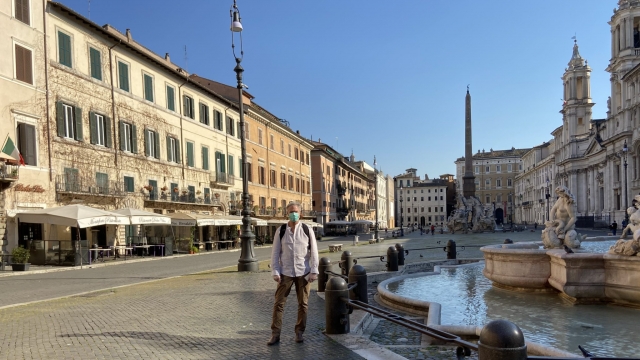 SMS
An American In Rome: Reflecting On Haunting Days, Recovery In Pandemic
By Peter Hecht
By Peter Hecht
June 5, 2020
Italy is opening its borders to travelers, and Italians are returning to cafes and plazas. A journalist in Rome offers insights on Italy's recovery.
SHOW TRANSCRIPT

With masks and social distancing, small groups of tourists are returning to the reopened Colosseum in Rome. With thermo scanners screening visitors for fevers, travelers are coming back to the famed Uffizi Galleries in Florence.

Italy opened its borders to travelers from neighboring European countries on Wednesday.

And journalist and American expatriate John Henderson is seeing long-desolate piazzas and parks of his beloved Rome beginning to spring back to life. He sees some Italians feeling liberated from a pandemic that has sickened more than 230,000 people and claimed more than 33,000 lives. Infections are now down dramatically.

Henderson says Italy's tourist industry is rebounding with cautious hope — as well as fear and considerable uncertainty for what lies ahead.

"It's opening up now. The head of tourism in Italy said there are 600,000 reservations from around the world in Italy until the end of the year. Well, that's not that many, but it's an encouraging sign. But I guess what I'm saying is: We are all bracing for a second wave."

Henderson, a longtime Denver Post sports writer, fell hard for Rome and moved there in 2014, after a quixotic trek led him to write a book about training at a Roman gladiator school.

These days, his travel site Dog-Eared Passport has become a chronicle of Italy's suffering and resilience amid the pandemic. He's provided social media followers with nightly updates on Italy's death count, lockdown and gradual recovery.

"It was extremely sad to see my favorite city in the world so closed up, and knowing behind all those closed doors were people really struggling to get by with their businesses, with food, with their budgets, their economy, everything.

You know even personally, walking by my favorite restaurant I couldn't go in. It was a pub, an Irish pub in the middle of Rome that I go to watch my soccer games. It was all closed up, and I just put my head against the wall and just laid there and closed my eyes for a while. It was very, very sad."

Henderson became riveted on Italian Prime Minister Giuseppe Conte. As the leader put in place quarantine and lockdown measures, he also became a guiding voice for the populace.

"He came across as very calming, very soothing, very patient, and he told us very clearly — even guys like me, immigrants like me — we knew what we had to do. He didn't deny it was dangerous. He says 'This is what we need to do to get this down. If we don't do it, we're going to all be in trouble.'"

Now, with Italy reopening and Italians free to dine and return to streets and piazzas with social distancing, Conte still warns of the "calculated risk." He  says protecting the health of Italians isn't "negotiable."

Henderson finds himself reflecting on haunting times, empty streets and the strange, stark beauty of his city. But he hopes such scenes are over.

"Bring the tourists back. Bring the people back. Rome is a city of people. We love to go out. We love to hang out in the piazzas, with good food, good wine, good friends. And we're hoping that is starting to come back now."