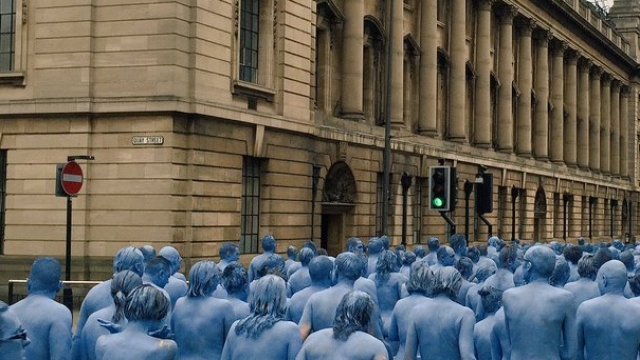 Because an American artist asked them to.

Spencer Tunick's "Sea of Hull" was commissioned by an art gallery to celebrate the city's maritime heritage.

"We covered the people with the art of the gallery. ... It also references the rising of the oceans and climate change," Tunick told the BBC.

Tunick is a photographer from New York. He's been photographing groups of naked people since the '90s.

SEE MORE: This Restaurant Lets You Eat Naturally – Like Naked

"Today, the body is coming up against a lot of harsh censorship. ... The body should be free, to make art naked in public space. And anyone who tries to stop that is basically not really here for a healthy future on Earth," the artist told outlets.

He's been arrested multiple times for organizing similar installations in New York. Even after the Supreme Court upheld a lower court ruling in Tunick's favor on the basis of the First Amendment, he says he was still denied a permit.

Other countries seem to be more receptive of his nude installations. In Munich, he did another body paint installation with red and gold for an interpretation of a Richard Wagner opera.

Tunick is currently planning to do a piece outside the Republican National Convention. It'll include 100 women holding mirrors "reflecting the knowledge and wisdom of progressive women and the concept of 'Mother Nature' into and onto the convention center."