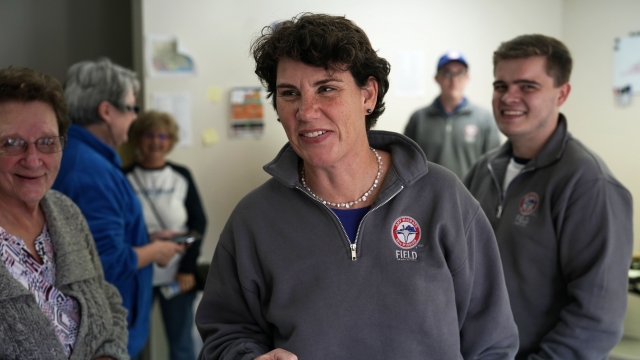 The retired Marine combat pilot filed her senatorial bid alongside her mom, former Kentucky Gov. Martha Layne Collins, on Friday. In an interview with the Associated Press, McGrath pointed to newly-elected Kentucky Gov. Andy Beshear's win last month, saying his victory "absolutely gives us momentum because it shows that against an unpopular Republican incumbent, a Democrat can win."

She also didn't hold back on her criticism of McConnell, saying: "If you want more of the same, Mitch McConnell is your guy. He is the ultimate insider. He is the epitome of dysfunction in Washington. You can't drain the swamp, as President Trump has touted doing, without getting rid of Mitch McConnell."

McConnell's campaign manager responded to her comments, telling the Associated Press: "Amy McGrath knows she can't possibly make a cogent argument that she could do a fraction of the good Mitch McConnell does for Kentucky, so she's left with this disjointed, half-baked justification for her candidacy that is simply not ready for prime time."

McGrath had previously ran for Kentucky's 6th congressional district back in 2018, but ended up narrowly losing to Republican incumbent Andy Barr.