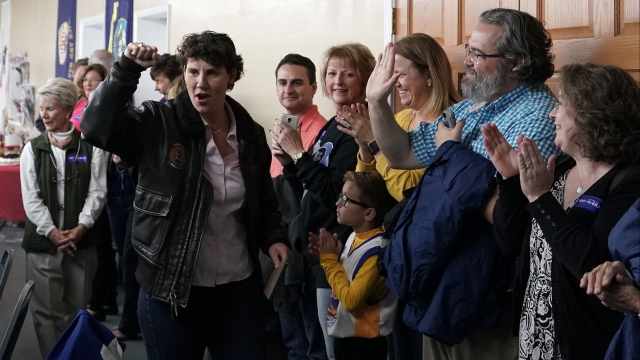 "When I was 12 years old, I knew exactly what I wanted to do when I grew up. I wanted to fly fighter jets and land on aircraft carriers, because that's the toughest flying you can do."

McGrath's run for Senate as a Democrat may draw even greater attention because of the powerful man she is taking on.

"Good morning, everyone. Victory is in the air. We're going to bring it home tomorrow night."

This time, McGrath is offering another biographical ad on her military career — and on allegedly being ignored by her opponent. She says when she was 13, she wrote to McConnell to advocate for women serving as fighter pilots.

"He never wrote back. I'm Amy McGrath. And I've often wondered: How many other people did Mitch McConnell never take the time to write back?"

She also offers this indictment of the Kentucky political icon:

"We can't talk to each other about the leaders of our country anymore without anger and blame. Well, it started with this man who was elected a lifetime ago and who has, bit by bit, year by year, turned Washington into something we all despise, where dysfunction and chaos are political weapons, where budgets and health care and the Supreme Court are held hostage: a place were ideals go to die."

The McConnell campaign responded with this "welcome to the race" video. It highlights McGrath's comments comparing Donald Trump's election to 9/11 and says she's "too liberal for Kentucky."

McGrath won 60% of the vote in Lexington in her 2018 House race against GOP incumbent Andy Barr, but she lost the election due to her performance in rural regions that supported President Trump. Political observers say she'll have to connect better with white working-class voters if she wants to take down McConnell, who has served in the Senate for nearly 35 years.