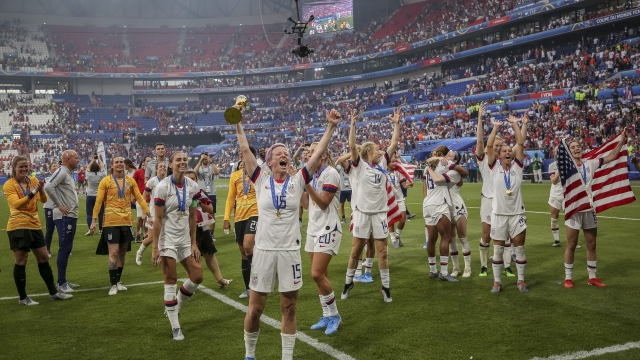 SMS
U.S. Youth Soccer Hopes World Cup Title Can Boost Kids' Participation
By Austin Kim
By Austin Kim
July 8, 2019
Youth soccer participation may be up compared to decades ago, but the sport is having a hard time retaining kids.
SHOW TRANSCRIPT

A fourth World Cup title has cemented another U.S. women's national team as a transcendent, inspirational group of athletes.

That sentiment is captured in ads from companies like Nike, which focus on women's empowerment. But it also touches on a trend soccer's been hoping to see: More American kids — especially girls — have picked up and stuck with the sport.

The U.S. women's national team has been here before. The 1999 team's World Cup win and Brandi Chastain's iconic celebration are widely regarded as the catalyst for the rise of youth soccer in America.

And the numbers show that, yes, overall participation is up over the last few decades. U.S. Youth Soccer reported sign-ups for girls' soccer rose 37% between 1995 and 2015, and boys' sign-ups rose 21%. That's saying something, given the enduring popularity of sports like basketball and football.

But dig deeper and soccer is still hardly on steady ground. Participation for kids ages 6-12 was down 9.5% from 2016-2017. That's according to a recent study from the Aspen Sports Institute. And the Sports Fitness Institution of America found about 25% of kids ages 6-17 left organized soccer in 2017.

Part of the reason, the Aspen Sports Institute found, was cost. It can cost thousands of dollars for kids to play organized ball at the higher levels. That can price out lower- and middle-class families.

Even Hope Solo, the former star goalkeeper for the U.S., has said her family would not have been able to afford these costs if she were a young player today. She said at a sports conference last year that soccer is now a "rich white kid sport."

The recent downward trend is something U.S. Soccer Federation President Carlos Cordeiro has recognized. He says he hopes to address it by the 2026 World Cup. The U.S. will co-host the men's tournament with Mexico and Canada that year.

U.S. Soccer, and specifically the women's national team, has proven championship teams can have a lasting impact on the next generation. Take, for example, Rose Lavelle, who scored in the 2019 World Cup final. She said after the game, "I just won a World Cup with people I grew up idolizing." Now, it's up to athletes like Lavelle to return the favor for the future of their sport.