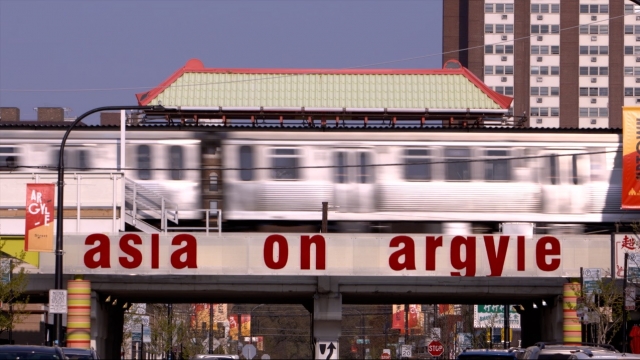 A survey found 90% of Asian American entrepreneurs over age 45 reported revenue loss amid the pandemic.

In Chicago's Asia on Argyle, these historic city blocks are lined with Southeast Asian shops and restaurants. There are about 60 businesses, mostly Vietnamese, Cambodian and Thai. The businesses here have been hit hard by the pandemic and the people in this community now live on high alert due to recent incidents of anti-Asian hate.  a

"A lot of the businesses haven't been able to survive," says Jennifer "Nuky" Pham, co-owner of Mini Thương Xá Pharmacy.

A survey found in the U.S., 90% of Asian entrepreneurs over age 45 reported revenue loss and, in this past year, saw the largest decline in ownership than any other group.

When Pham's parents opened their store almost 40 years ago, they were the first Vietnamese business on the street.

"What my parents created here, they created a community, and they wanted to see their community thrive," says Pham.

"We're celebrating the diversity, the beauty that makes Asia on Argyle so special," says Nguyen.

Nguyen says it can be easy to see Asian Americans as just victims of hate crimes and she wants to change that narrative.

"Celebrate Argyle is more than a community initiative. It's an opportunity for us to tell a story about our community," says Nguyen.

With a little over $13,000 in grant money they received from a nonprofit partner DishRoulette Kitchen, Celebrate Argyle has been creating events, providing mini grants for 10 local businesses and providing social media boosts just this year.

One of the restaurants is Nhà Hàng Vietnam Restaurant, which lost about 30% of their profits during the pandemic.

"Our family really loves what we're doing," says Long Nguyen, co-owner of Nhà Hàng Vietnam Restaurant. "When we got an opportunity to come to the United States, we wanted to restart our family business and bring Vietnamese cuisine to the U.S."

The menu here extends far beyond pho or bánh mì.

"A lot of individuals come there to understand and learn about the Vietnamese cuisine. And that's something that we wanted individuals to know about," says Nguyen.

Around the country, particularly in this past year, Asian Americans have galvanized support for each other. Chefs mobilized to fight anti-Asian violence. Others have raised funds for free cab rides and companies are supporting local AAPI businesses.

"At a time like this, it's a really good time to call into your friends and community members to work together to create something," says Nguyen.

As rent prices and landlord harassment increase, grocery stores and medical providers are forced to close in Los Angeles' Chinatown and Little Tokyo.

Rose Ave Bakery is taking the effort it used to adapt during COVID-19 and applying it to the fight against anti-Asian hate.