Amid Calls To Abolish ICE, Here's A Look At The Agency's Many Roles 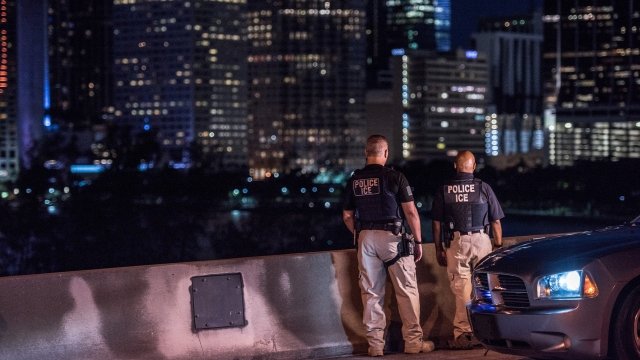 Recently, there have been a growing number of calls to "abolish" U.S. Immigration and Customs Enforcement. But the department's agents are more than just a "deportation force."

Immigration enforcement is the biggest area of responsibility for ICE. But the agency does a lot more than that, including helping run the student visa program, supporting international cybercrime investigations, working to stop organized retail crime and aiding terrorism investigations.

On an average day, ICE removes 645 undocumented immigrants from the country, blocks over 3,000 malware attacks, seizes $1.4 million in illegal currency and assets, and confiscates nearly 3,000 lbs. of illegal drugs.

Calls to eliminate ICE have popped up before, but after a spike in family separations at the border by other government agencies, the calls seem to be more mainstream.

A growing number of Democratic lawmakers are joining in, but most don't want the U.S. to abandon immigration enforcement. Instead, many want to split up the agency's necessary responsibilities and take a hard look at how the country enforces its laws.

Sen. Elizabeth Warren wrote on Facebook that ICE should be replaced "with something that reflects our values."