Americans Worry About Loved Ones In Ukraine As Russia Escalates Attack 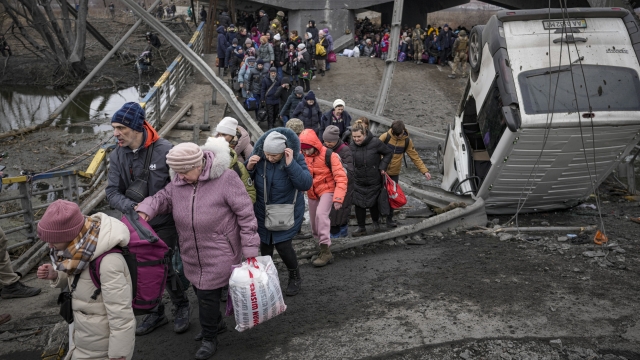 SMS
Americans Worry About Loved Ones In Ukraine As Russia Escalates Attack
By Maura Sirianni
By Maura Sirianni
March 5, 2022
According to data from the U.N., more than 1 million Ukrainians have crossed borders since the Russian invasion started.

Families with loved ones in Ukraine are experiencing fear and uncertainty.

Oftentimes, the check-ins are sporadic, and waiting is the hardest part.

Kiarash Hudarzi moved to Nashville in 2021 to prepare a better life for his wife and two children.

Like many living in America, he's worried sick about his loved ones fleeing Ukraine.

"I was crazy. I was, you know, I didn't sleep about five days. I was just crying. I couldn't stop. I didn't want them to die like that," Hudarzi said.

Hudarzi says his wife and children slept in underground metro tunnels for six nights, afraid of what was happening above ground.

In Colorado, Eugenia Olesnicky waits by the phone. Her cousins live in Russian-held parts of Ukraine, but they recently stopped responding.

"The last contact I had with them, they had run out of food and water. There's no heat, there's no gas, and there's no electricity, and this is the case for all of the people that are in that area," said Olesnicky.

Sixteen-year-old Ivan Kozlov came to the U.S. as an exchange student last year and says it's hard to focus on life here, while his family endures war back home.

"The first thought in my head was 'how is my family doing? Like, is my city OK?" Kozlov said.

Kozlov says his father joined the Ukrainian armed forces and for now, his mom and sister can't leave.

According to data from the U.N., since the Russian invasion began, more than 1 million people have fled.

Roughly half of those refugees have gone west to neighboring Poland, including some Americans who had been living abroad, like Grady Andersen of Phoenix.

"It's not the danger of the explosions or the threat of troops in Kyiv that made me leave. That's not the kind of thing that scared me. Really, the threat is living under Russian occupation," said Andersen.

Kozlov says for those who have stayed to fight for his homeland, that's what keeps him going.

"The spirit of the people defending our land, that's what makes me happy, that's what gives me hope," said Kozlov.

Even for those without loved ones in Ukraine, what's happening there is on the minds of many.

One way to help is through donations. The Better Business Bureau has vetted several legitimate organizations.