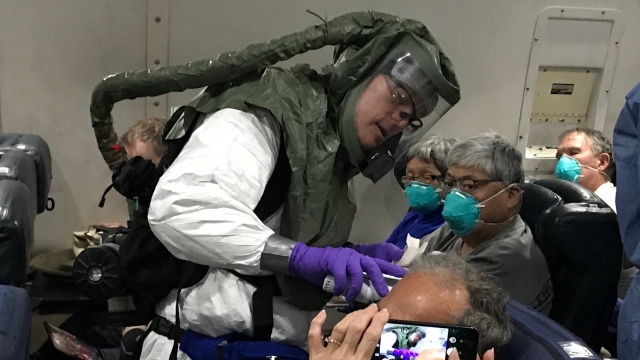 Nearly 100 new cases were reported on the ship docked in Yokohama, Japan, this morning, bringing the total number of passengers with coronavirus to 454.

One couple, who had been quarantined on the Diamond Princess for nearly two weeks, were among more than 300 Americans transported from Japan to the U.S. early Monday morning.

In a statement, Gay Courter said she and her husband, Phil, are grateful to be back on U.S. soil. She added, "Although we wish we could be home with our friends and family, we understand that we may have been infected."

The Courters, a novelist and documentary filmmaker, were vacationing aboard the Diamond Princess when the virus began infecting passengers aboard the ship. For more than a week, they documented their experience in quarantine.

On Feb. 16, they put in a request to participate in an evacuation to the U.S.

The captain announced all U.S. passengers would be screened before traveling back to America.

"The minister of health will conduct tests on guests that have not yet been tested, who have not tested positive or have not shared a stateroom with individuals who tested positive. So members of this group who test negative and do not show any symptoms will also will be allowed to disembark at the end of the quarantine period, upon the latest results being confirmed," the captain announced.

Out of caution, those very passengers, including the Courters, were also examined after boarding the charter planes at Haneda Airport. Phil courter said, "Everyone on the flight was aware that anyone could be infected and not know it."

But he says they took their own precautions to protect each other from the virus: "We wore masks, we used sanitizer, and when we slept, we turned our heads to our partners instead of our neighbors."

Various screenings and temperatures checks were also conducted by staff throughout the 12-hour flight.