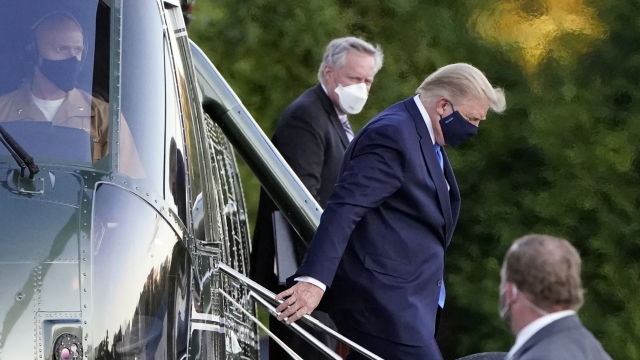 SMS
Americans React To Trump's COVID Diagnosis
By Cat Sandoval
By Cat Sandoval
October 2, 2020
The president and first lady are both positive for the virus.
SHOW TRANSCRIPT

President Trump has COVID-19. How are Americans reacting?

Mackenzie Wackler, Dayton, OH: "Even though I'm not a Trump supporter, it makes me so sad that Trump has COVID. I wouldn't wish it on anyone."

Kathy Wilson, Chicago: "Sadly on Facebook there's quite a bit of 'OG I hope they die,' which is ridiculous even if you don't support Trump."

T. Payne, Dayton, OH: "It's unbelievable. Hmmm really is it a hoax? I really don't know what to believe. Is it for real?"

John Smith, New York City: "Some of the things he says and that he tweets. They are not always accurate. So with him? Who's to say?"

Joe Duran, New York City: "Hopefully he'll learn and realize that it's not a hoax and it's a real thing and it's a pandemic and that he will then lead according to this new experience that he has. Hopefully."

Naomi Mcgarraugh, Austin, TX: "I hope that he stays strong and that nothing happens to him so he can win the election this year."

Camilla, Washington, D.C.: "Politics aside, he had it coming. He wasn't wearing a mask and he didn't believe in it."

Xavier Ortega, New York City: "They are human. I feel sorry about him and about his wife."

Laura Mcgarraugh, Austin, TX: "He's very strong and healthy and will get the best care. He'll be an example and an inspiration for all of us."

Mike Gee, Washington, D.C.: "You don't want people dying from that, you want people to be healthy. You want them to be ok even if you don't agree with their policies."