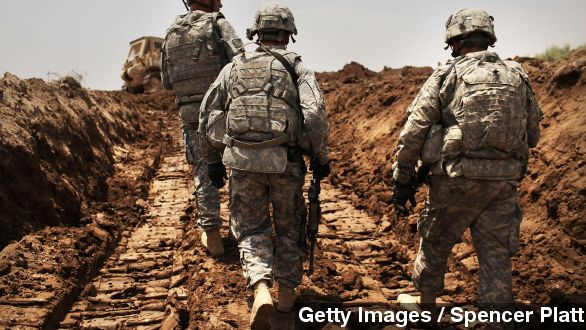 For all the talk of a war-weary American public, Americans are increasingly open to another Middle East ground war. (Video via U.S. Department of Defense)

Not long ago, many Americans were calling for the U.S. to get out of Iraq. So, what changed?

In recent months, Americans have come to view ISIS as a bigger threat to U.S national security. A wave of execution videos, including those of American citizens, have undoubtedly played a big role in shaping that perception.

But the public's desire for ground troops isn't matched in Congress. (Video via U.S. Department of Defense)

Last month, the president sent lawmakers a formal request to use military force against the militants, but Congress doesn't seem in a hurry to debate it.

No one wants to go on record voting for something that could backfire, especially the Democrats who ran on anti-war platforms. (Video via House Democrats)

Even many Republicans are reluctant.

"In my view, American boots on the ground should always be the last step, and we need to exercise other steps before that," Sen. Ted Cruz said on CNN.

The administration's request for future military action gives Obama some flexibility when it comes for ground troops. The language is vague and bans "enduring offensive ground combat operations."

Currently, there are about 3,000 U.S. military personnel in Iraq serving in non combat roles.