Fake Evacuation Alerts Were Sent To Some Americans In South Korea 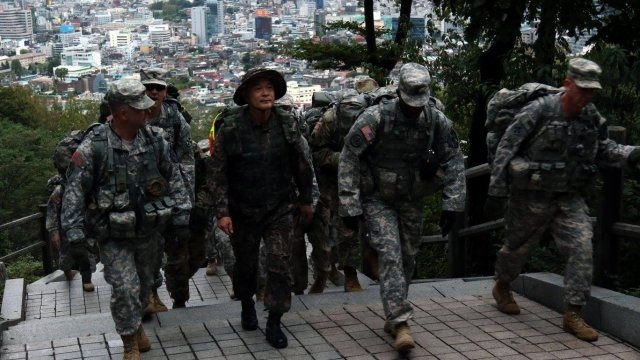 The alert was spread via text message and social media to a "handful of service members and families."

Alerts via text message and social media warned Americans living in South Korea to evacuate. Turns out they were fake.

The fake alerts claimed to be noncombatant evacuation operations, or NEOs. A real NEO would impact family members of U.S. forces stationed on the Korean peninsula and civilian Defense Department employees. The hoax, while short-lived, reached "a handful of service members and families."

The culprit behind the fake evacuation alert has yet to be identified.

The incident is now under Army counterintelligence investigation and comes at a time of intense, and sometimes uncivil, rhetoric between U.S. President Donald Trump and North Korean leader Kim Jong-un.

There are around 28,000 service members stationed in South Korea. Many of them participated in annual joint military drills with South Korea that North Korea says are a threat to its sovereignty.

Removing U.S. troops from the Korean Peninsula is a popular idea with both China and Russia, North Korea's two biggest allies and trading partners. Both have lobbied the U.S. to adopt a "freeze-for-freeze" policy.

Here's how that would work:

The U.S. would agree to stop its regular military drills with South Korea. In return, North Korea would suspend its nuclear and missile tests.

Back in June, a North Korean diplomat said his country would be willing to "talk in terms of freezing nuclear testing. ... If the American side completely stops big, large-scale military exercises temporarily or permanently, then we will also temporarily stop."

Previous administrations have gone down this road.