Americans Do Not Remember Jan. 6 Capitol Riot As One People 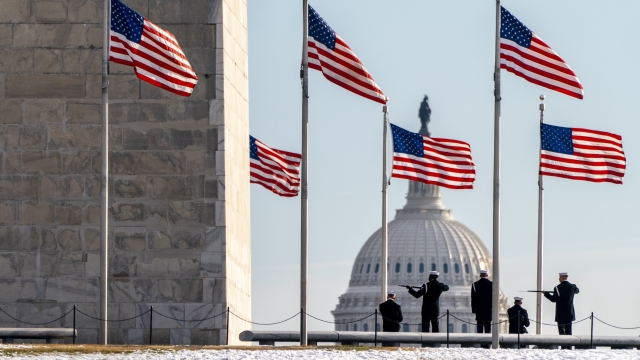 On Thursday, in contrast, the anniversary of the assault on the U.S. Capitol exposed a nation of two peoples.

Democrats, led by one angry president standing in the gleaming hall of statues overrun a year ago by the pro-Trump mob, remembered. Republicans in large measure moved on.

How a nation mourns and remembers has long been fundamental to America's glossy ideal of shared values, common purpose and familiar sense of history. The division on this day showed a country far removed from that.

The counterpoint to President Joe Biden's plea to save democracy and to the moment of mute remembrance led by House Speaker Nancy Pelosi was a day of silence from most of the Republican lawmakers who, just like the Democrats, had been hunted by the attackers.

"How dare anyone — anyone — diminish, belittle or deny the hell they were put through?" President Biden demanded. "We saw it with our own eyes. ... The lies that drive the anger and madness we saw in this place, they have not abated."

Republican Sen. Lindsey Graham of South Carolina acknowledged Jan. 6, 2021, was a "dark day in American history." But he accused President Biden of mining it for political gain.

"What brazen politicization of January 6 by President Biden," he tweeted.

Outside Washington, vigils planned for the day were scattered and largely split along ideological or party lines.

In that unified, wounded and vengeful time, Americans were gung-ho about a war in Afghanistan that would last so long it was fought by troops who weren't born when it began.

For his Jan. 6 remarks, President Biden chose not the White House but the scene of the crime, which is also the seat of democracy. He spoke from a mirror-polish circular platform in Statuary Hall. He and Vice President Kamala Harris had no live audience before them for their televised remarks.

"You can't love your country only when you win," he said of the attackers whom some Republicans brand as "American patriots."

With revulsion, he recalled the American flags brandished as spears by the rioters and the mock gallows they erected outside for Vice President Mike Pence when he was inside, preparing to carry out his ceremonial duty of affirming the election result.

"I will allow no one to place a dagger at the throat of democracy," President Biden said.

The events of that day brought a measure of unity in the first shockwaves as top Republicans joined Democrats in assailing Trump's exhortation to his followers to "fight like hell" at the Capitol. Graham notably said he was through with Trump, a separation that could be measured in weeks, not the forever he suggested.

That commonality dissolved within hours, after shaken lawmakers regrouped to certify President Biden's victory. Trump's hold on the party has only tightened since.

Many Republican officials, it is said, remain aghast at Trump's machinations. But you have to take a Democrat's word for that.

"Just about every one of them is so afraid of Donald Trump," Senate Majority Leader Chuck Schumer of New York told CBS' "This Morning."

Polls help illustrate that power, suggesting that two-thirds of Republicans believe Trump's thoroughly debunked allegations that the election was fraudulent.

And despite the graphic violence that unfolded before the cameras on Jan. 6, 2021, only about 4 in 10 Republicans recall the attack as very or extremely violent, compared with 9 in 10 Democrats, according to a new poll by The Associated Press-NORC Center for Public Affairs Research.

Even one of the most divisive figures of the 9/11 era bemoaned the divisions of today.

Former Vice President Dick Cheney came to the Capitol with his daughter, Rep. Liz Cheney, one of the few Republicans to go all in to stand up to Trump. He said today's Republican Party is not the party he represented in Congress before joining the Bush administration.

"It's not a leadership that resembles any of the folks I knew when I was here for 10 years," he told reporters. In a statement, he expressed disappointment "at the failure of many members of my party to recognize the grave nature of the January 6 attacks and the ongoing threat to our nation."

In Florida, Trump canceled a news conference, opting instead to issue statements laced with election falsehoods reheated from his protracted, losing fight to stay in power after his defeat.

On the eve of the anniversary of the insurrection, he falsely accused the Biden administration of moving toward a federal mask mandate and implored his supporters — "MAGA nation" — to "rise up."

But on Thursday, a year after people fought "like hell" for him, they did not rise again.