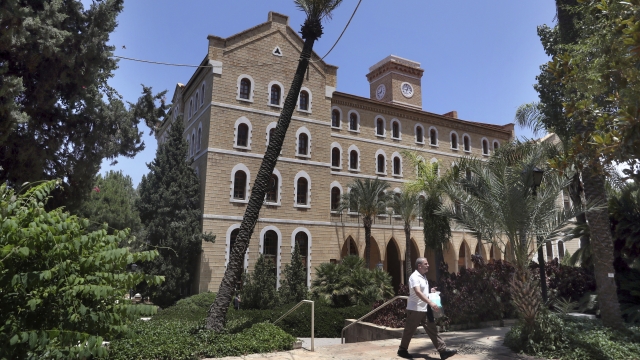 The American University of Beirut is one of the most renowned — and historic — colleges in the Arab World. It's also now facing the biggest financial crisis in its 150-year history as the Lebanese economy collapses.

University President Fadlo Khuri told The Associated Press this week that the school is laying off 25% of its workforce, slashing salaries and even shelving a major medical center expansion amid the COVID-19 pandemic.

"What we're doing is we're closing administrative departments across the university and especially at the medical center, or downsizing substantially. The layoffs are very painful. AUB has never had to do this before. We've never been forced to have layoffs."

The university is $30 million in the red as the coronavirus pandemic impacts an already devastated Lebanese economy.

Lebanon, with 6.8 million people, has had only 1,600 COVID-19 cases and 32 deaths. But even before the virus, the country faced its worst economic crisis since its 1990 civil war, with its currency plummeting by nearly 70%.

Protesters are taking to the streets to decry government corruption and mismanagement. Unemployment has reached 35%, with half the population in poverty.

Khuri says he's heartbroken over putting more people out of work — as he tries to sustain the university for the future in Lebanon.

"This is very difficult personally. I mean, I am a great grandson of this institution. Many of these people were hired while we were here and they mean something to me, they are good human beings."