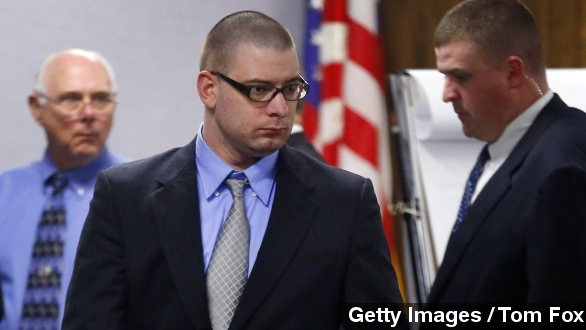 As the trial of Eddie Ray Routh entered its seventh day Thursday, the court's focus turned to some odd revelations about his mental state.

Routh is accused of killing famed Navy SEAL sniper Chris Kyle and his friend Chad Littlefield. He confessed to shooting both men at point blank range after his arrest in 2013.

After being arrested Routh defended his actions during the interrogation. Referring to Chris Kyle he said, “If I did not take down his soul, he was going to take down mine.”

After the shooting he took Kyle's truck and drove to his sister's house where this phone call was made.

"He said that he killed two guys. They went out to a shooting range. He's crazy, he's psychotic," Laura Blevins, Routh's sister, told a dispatcher

A verdict of not guilty by reason of insanity could keep Routh out of prison — he would instead likely be committed to a psychiatric hospital. In order to get that verdict, the defense must first prove that Routh didn't realize what he was doing was wrong at the time.

Routh, who walked into the courtroom stone-faced on the day of opening arguments, has a history of mental illness, including PTSD and symptoms of paranoid schizophrenia. Just days before the murder he had finished a stay in the hospital after holding his girlfriend hostage.

As Routh's family and friends have taken the stand throughout the trial, stories of his extremely odd behavior have begun to surface. A psychiatrist who spent six hours with Routh after his arrest spoke on Thursday about the suspect's bizarre beliefs.

"He thought that his neighbor was a member of the Mexican mafia. His neighbor is actually a detective with the local police department. ... He thought a couple of his co-workers ... were cannibals and they were going to eat him," ABC reports.

To counter the defense's argument of insanity, the prosecution is focused on Routh's use of drugs and alcohol. CNN reports six months before the murders, "police caught up with a shirtless, shoeless Routh walking the streets of his hometown. He was crying and smelled of alcohol."

Routh's ex-girlfriend, who has also spoken in court, claims he was smoking pot and drinking just before heading to the shooting range with Kyle and Littlefield. The trial could continue through next week.