Americans' Views On Race Relations Depend On Their Race 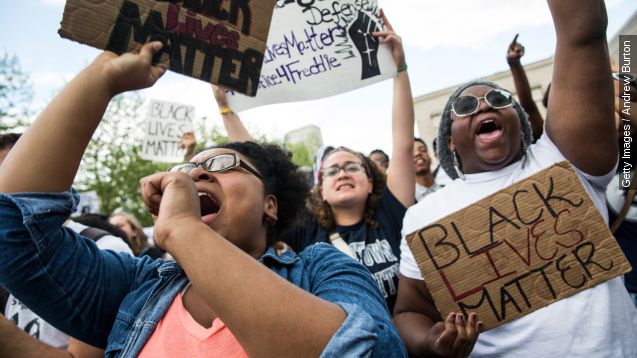 SMS
Americans' Views On Race Relations Depend On Their Race
By Matt Picht
By Matt Picht
June 11, 2015
According to a Gallup survey, black Americans are more likely than white Americans to view race relations as the most important problem in the U.S.
SHOW TRANSCRIPT

Gallup polled a random selection of Americans six times over the past year and a half, asking them what they thought the most important problem facing the U.S. was. Around 4 to 5 percent of respondents overall named race relations as the top problem, up from 1 percent at the beginning of 2014.

But the responses diverge sharply when separated by race: 13 percent of blacks named race relations as the country's most important problem, compared to only 4 percent of whites.

That 9 percent gap is a pretty significant difference — Gallup reports the racial split hasn't gone over 4 percent in any year when the question was asked from 2002 to 2007.

Racial relations has skyrocketed to the top of the national agenda thanks to several high-profile police killings of unarmed black men. The deaths Michael Brown, Eric Garner and Freddie Gray have all elicited nationwide protests.

But Gallup's numbers have consistently shown white Americans aren't as concerned with the problem. In past surveys, whites tend to be more optimistic about race relations and less likely to perceive discrimination.

According to Gallup, the top issues most Americans are concerned with are the economy, unemployment and dissatisfaction with the government.