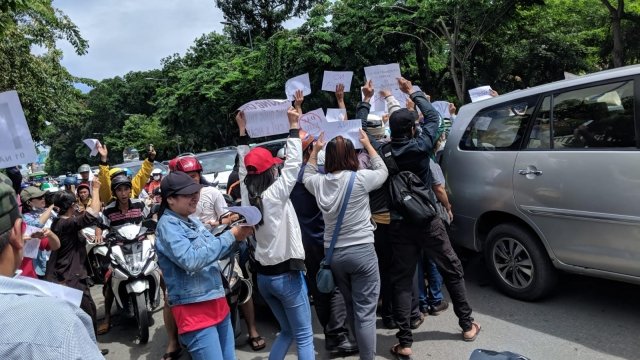 SMS
American Reportedly Among Dozens Arrested In Vietnam Protests
By James Packard
By James Packard
June 14, 2018
More than 100 people were arrested in the country over the weekend, according to several outlets.
SHOW TRANSCRIPT

Authorities in Vietnam reportedly detained more than 100 people as protests turned violent over the weekend. An American is among them, according to several news outlets.

The protests centered around a proposed Vietnamese law that would allow foreign investors to lease land in specific parts of the country for up to 99 years. The government has touted it as an opportunity for an economic boost, but detractors say it could open up the door to a creeping China.

American Will Nguyen was reportedly arrested Sunday in Ho Chi Minh City. His family told The New York Times he was beaten and dragged into the back of a police vehicle. Pictures on social media appeared to show him with blood on his forehead.

A spokesperson for the U.S. Embassy in Hanoi said officials were aware of reports about Nguyen's detention but said they wouldn't comment further because of privacy concerns.

Vietnam is a communist country, and the government often tries to quash protests, though they are legal. In this case, it appears the government allowed the protests but reportedly started arresting people when the demonstration got violent. The BBC says people threw rocks and Molotov cocktails. It's not clear what sparked the violence.