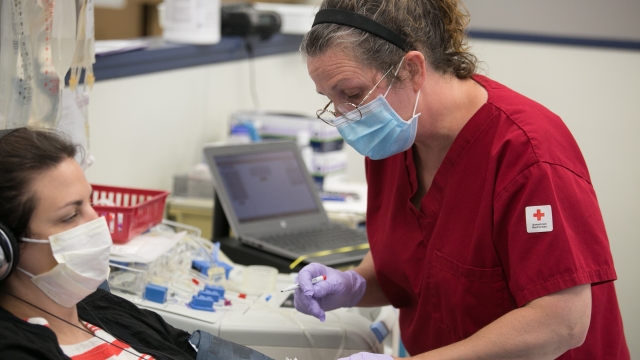 The American Red Cross has teamed up with the NFL to encourage more people to donate blood after it saw an increase in blood drive cancellations in 2020.

"In 2020, we saw our blood drives canceled three times higher than the year before."

Jessica Merrill, the director of Biomedical Communications at American Red Cross, says this was mostly due to the pandemic. She says closed businesses and schools made it difficult to hold blood drives at those places. She says schools account for about 20% of their overall blood drives and that collections at high schools and colleges dropped by more than 50% compared to the previous year.

"So, having those canceled was definitely an obstacle that we had to overcome. We are really, really grateful that we had new blood drive sponsors step up," Merrill said. "And so for the most part, we've been able to mitigate what would have effectively been lost donations. But on the whole, we came down a little under what we had hoped to collect."

"We saw some blood drives canceled back in May during the Black Lives Matter movement when there was civil unrest," Merrill said. "A lot of that is to make sure that our staff and our donors remain safe, that it's safe for them to be out there and that they can get to and from."

The winter weather is also posing a challenge. Donations are usually down during the winter. The Red Cross is hoping to tackle this by working with the NFL.

One of the Red Cross' top priorities is collecting convalescent plasma. The Red Cross started collecting this last spring in light of the pandemic. Medical experts say plasma from people who have had and battled the coronavirus could help patients recover from the virus faster.

"The use of convalescent plasma from people who've recovered from one disease to give to a patient who is currently suffering the same disease is kind of age-old," Dr. Erin Goodhue, the medical director at American Red Cross, said. "It was used in the Spanish flu of 1918, if you can believe it."